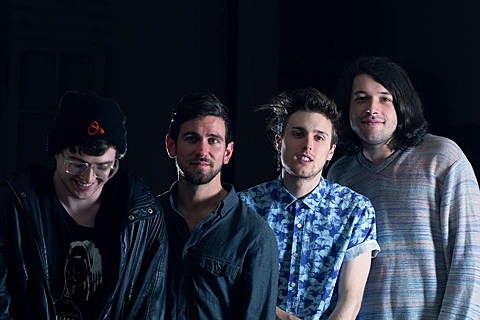 Teen Suicide (the band led by Sam Ray aka Ricky Eat Acid) are reissuing their dc snuff film and waste yrself EPs on December 11 via Run For Cover, and they announced a NYC release show for December 4 at Baby's All RIght. Support comes from local noisemakers Yvette and DIY duo Diet Cig. Tickets are on sale now. You can stream the EPs below.

Sam's fellow Run For Cover-via-Orchid Tapes musician Elvis Depressedly also plays a NYC show in December, on 12/1 at Shea with LVL UP and Yohuna (tickets). They're currently on tour with The Front Bottoms, and just played two BrooklynVegan-presented nights in NYC. If you haven't yet, check out pictures.

In one last bit of Run For Cover news, the label recently signed Montclair indie rockers Pinegrove. RFC recently reissued everything they've released so far (initially on Seagreen Records), which includes the new single "New Friends." You can listen to that below.

Pinegrove also added to some dates on labelmate Spencer Radcliffe's tour, including NYC TONIGHT (10/22) at Palisades (moved from Silent Barn). The bill also features Emily Reo (who just played the BV/Collect CMJ showcase as a member of Orchid Tapes band Foxes In Fiction) and Cuddle Formation. Tickets for tonight's show are still available.

Teen Suicide, LVL UP, Spencer Radcliffe, and Pinegrove all also played the Run For Cover CMJ showcase last week. Anyone catch that? All lists of tour dates and song streams below...