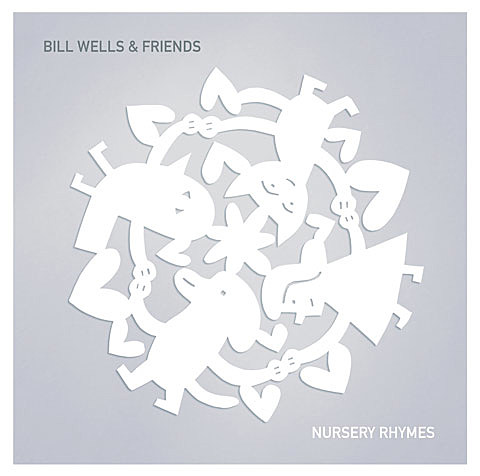 Scottish musician Bill Wells has played in a number of groups over the years, most notably his own improvisational jazz combo, the Bill Wells Octet, and The National Jazz Trio Of Scotland. He's also worked with a host of indie rock bands, such as The Pastels, Future Pilot AKA, Isobel Campbell, Jad Fair, Arab Strap man Aidan Moffat and more.

His new album, Nursery Rhymes, finds him taking on kids song standards -- "Twinkle Twinkle Little Star," "Hickory Dickory Dock," "Ring Around The Rosie" -- as collaborations with a host of cool people, including Yo La Tengo, Isobel Campbell, Teenage Fanclub's Norman Blake, Deerhoof's Satomi Matsuzaki, Hospitality's Amber Papini, and more. That's the artwork above and the full tracklist is below.

This isn't a kids album, however, as Wells applies his sparse, melodic style to the familiar songs. He elaborates:

They should be quite disturbing. Because ultimately part of the remit of a nursery rhyme was to give your child some of the harsh realties of life, while sugar-coating them with a catchy little melody. But I'm losing that coating and going straight to the nub of the thing.

We've got the premiere of "Three Blind Mice," which is a collaboration with Yo La Tengo and NY jazz musician Karen Mantler. You can stream it below.