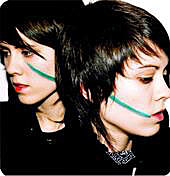 Written by Tegan and Sara, The Con was co-produced by Chris Walla (Death Cab for Cutie/The Decemberists) and recorded in his Portland, OR studio this past winter. The follow-up to 2004’s So Jealous, which sold over 150,000 copies in the U.S. alone, has already received a tremendous response from fans and critics alike. Tegan and Sara will take a break during their tour to perform the first single “Back In Your Head” on Late Night with Conan O’Brien on July 31st.