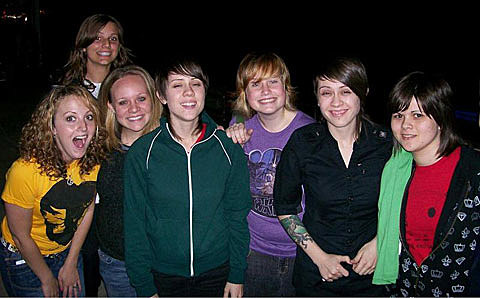 In what I think may be one of the oddest pairings I've seen in a while, Tegan & Sara are going out on a "Honda Civic Tour" with pop punk superstars Paramore (and other openers). Tickets for the New York show, August 6th at Jones Beach, go on "Citi Cardmembers" and "Live Nation" (password = keyboard) presale at 10am, and then general sale starts Saturday at 10am...

"We know a lot of you are big fans of Paramore already, but if you are not, please go check them out. I've had the pleasure of listening to their music for years and seeing them open for NO DOUBT! last summer. Not only are they wonderful songwriters and incredible performers they are also the nicest people you'll ever meet. We're proud and beyond excited to share the summer, the stage and 2 months of our lives with them. We hope to see you there!!!" [Tegan & Sara]

Hmmm. The twins play all Paramore dates except two which happen to coincide with day that Tegan & Sara make their sole Lilith Fair appearance this summer. The July 30th Boston (Mansfield) show at Comcast Center also has Kelly Clarkson, Carly Simon, Cat Power, and Sarah McLachlan on the bill. Tickets for that are currently on about 15 different presales and go on general sale Saturday at 10am.

Paramore don't play any Lilith shows, though they would probably be welcome if they wanted to. Metric are. All dates and a video for Passion Pit's remix of "Alligator" below...

Alligator - Passion Pit Remix! from Tegan and Sara on Vimeo.