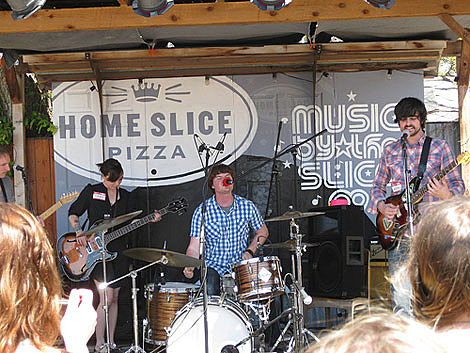 Seattle's Telekinesis have an album coming out on Merge Records in April. This weekend they're in NYC on a tour with Say Hi that hit The Bell House in Brooklyn last night (3/28) and visits Mercury Lounge in Manhattan tonight (3/29). Last week they were in Austin for SXSW...

"The showcased songs came from Telekinesis's upcoming self-titled debut, which was produced by Death Cab for Cutie's Chris Walla, and the similarities between the two artists were apparent. Songs like "Coast of Carolina," with its jutted blasts of guitar, could almost pass for a Walla solo song or early Death Cab tune if its more famous counterparts were given an adrenaline boost." [Austin 360]

Phil and the Osophers and Joe and the Flying Spoons are also on the Mercury Lounge bill. All dates and a video below.

And speaking of Merge and tonight (3/29), The Broken West are opening for AC Newman at the Bell House.

The Merge / Barsuk showcase that Telekinesis played at SXSW was held at the Parish on Saturday, March 21st. The Wooden Birds, Ra Ra Riot, Say Hi, Lou Barlow and The Rosebuds were also on that bill.

The Rosebuds have some shows scheduled in April, two of which are in NYC. The first is at the Bell House on April 16th with Megafaun. The show is open to the general public and tickets are on sale. The second is three days later - Earth Day - at 92YTribeca, and is only open to kids and their parents (Ages 3-13 recommended. Adults must be accompanied by a kid and vice versa). More info and tickets HERE. All dates below...