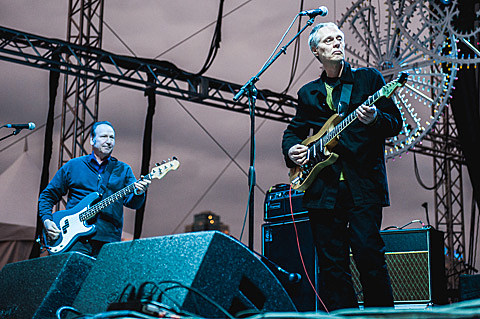 NYC art punk legends Television (sans Richard Lloyd) have regrouped before, and they've been doing so again this year, having already played a few shows, including Austin's Fun Fun Fun Fest. They've got more coming up, including this weekend's ATP UK (11/22-24), where they'll be performing their classic Marquee Moon in full.

They're also finally set to play their hometown again, and it will be with two very intimate shows as part of the opening weekend of Brooklyn's new Rough Trade NYC. They play the new venue on November 29 and 30, and tickets for these shows go on sale Friday (11/22) at 10 AM. Other opening weekend shows include Marissa Nadler and Phosphorescent, and the very first show so far is Sky Ferreira (though Television is the first Bowery-booked, proper, non-instore-like show).

There's also been talk of a new album, which would be their first since 1992's self titled album, which itself was some sort of "comeback," having been released 14 years after their sophomore LP. The band's current guitarist Jimmy Rip talked about the new album to Rolling Stone: "I never thought Tom would do it," he said, "but every time you try to predict Tom, you're gonna be wrong. And he said yes." He also said the songs can't be compared to anything from their first three albums. "Tom's pretty adamant about making a real effort to make something new each time," says Rip. "It doesn't make for super-fast work, but it's definitely an admirable goal." A live video of one of their new-ish (they've had it for a couple years now) songs "Persia" can be watched below.

Details on the new album are of course still sparse, but hey, if My Bloody Valentine, David Bowie, Daft Punk, Mazzy Star, Black Sabbath, and Boards of Canada can do it...

Television - "Persia" in Argentina in April 2013