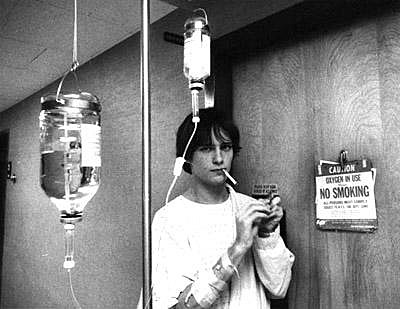 "When I saw Tom Verlaine play for the first time, I realized he had 'it,' and all my life I've looked to try and teach people 'it' and usually come away with great despair," Lloyd said. "You can teach harmony, but you can't teach melody. You can show someone the craftsmanship of songwriting, but they're the ones who have to put out the antenna and wait for the universe to send them a song.

"The actual creative process is not one over which human being have control. I always thought that; otherwise I wouldn't have picked Tom. I'm the one who made the decision and suggested to our first manager, Terry Ork, that he put Tom and I together as a guitar-playing team." [Richard Lloyd to the Daily Times]

Television's Richard Lloyd will be performing a "one-night-only" at the Studio at Webster Hall on Thursday, November 12th. Also appearing will be guests John Varvatos (of his-store-used-to-be-CBGB fame), Bob Gruen (featured in the Brooklyn Museum's current Who Shot Rock & Roll exhibit) and Legs McNeil, author of "I Slept with Joey Ramone." The opener will be Hey Battlefield. Tickets are on sale.

Speaking of CBGB and Richard Lloyd, his old friend Patti Smith (who played the final show at the club with Lloyd in 2006) has a trio of end-of-year shows around the corner from CBGB, at Bowery Ballroom. Tickets are still available for all of them.

Patti, along with Jerry Seinfeld, Jackie Gleason, Woody Allen, Allen Ginsberg and 395 others, was just named one of the New York City 400 by the Museum of the City of New York. It's the "first-ever list of New York City's 400 ultimate movers and shakers since the city's founding in 1609".

A flyer for the Studio show and a pair of videos from Lloyd's show with the Sufi-Monkey Trio at LPR in September are below... 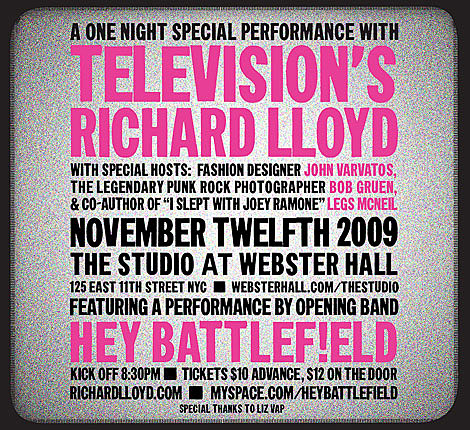