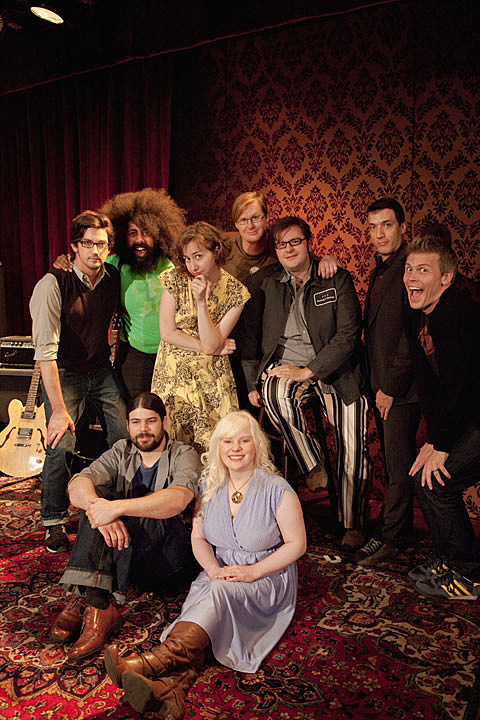 It goes without saying that New York Fucking City is the best fucking city in the fucking galaxy. Name some attributes of another city (and I am sure people *cough*commenters*cough* will) and any New Yorker worth his or her salt will gladly, after they're done laughing hysterically, verbally pants your claims and make you realize how much time you just wasted with your nonsense. Everything here is better, and we have more of it. End. Of. Fucking. Story. Among our better-than-everywhere-else attributes is our Comedy scene. And one way we articulate and reinforce this attribute is by having several comedy shows happening across this city every night of the week.

One of NYC's biggest stand-out weekly shows is Tell Your Friends! which happens in the basement of a place called Lolita Bar (almost) every goddamned Tuesday. Tell Your Friends! is the brainchild of the talented Liam McEneaney and it has been bringing some of the most incredible line-ups to its basement audiences for over 6 years. Conceived as a showcase that danced somewhere between open mic territory and some of NYCs other smaller, more intimate alt rooms, Tell Your Friends! was devised as sort of a "comedy workout room;" a place where comedians could workshop new material without all the hassles and limitations of standard open mics. No, Tell Your Friends! wasn't the first place to do this type of thing; 15 years ago NYC had Eating It at Luna Lounge, Klaus favorite Patrick Borelli set up shop at the Gershwin Hotel, and, of course, there was Invite Them Up at Rififi where Eugene Mirman and Bobby Tisdale basically wrote the book on how smaller, independent comedy showcases should be run until its demise in 2008. Invite Them Up took their backroom comedy debauchery to the next level when they did three nights of recording at Pianos for a 3 CD/1 DVD set that was released by Comedy Central Records. Incidentally, now that Invite Them Up is long gone (unless you count the upcoming Invite Them Up night at the Eugene Mirman Comedy Festival), that CD/DVD set serves as an extremely important document of just how bonkers and diverse that era in comedy really was.

I had this idea that since I wanted to do a movie with standup comedians, comedians who had gotten their start outside the traditional comedy club scene, it shouldn't be shot as a typical comedy special. I sent Victor (Varnado) clips from concert films I felt should serve as the template, Woodstock, The Last Waltz, Stop Making Sense, The Beatles First Visit To America... Films that didn't just point a camera at a performance, but got you onstage with the acts themselves. And that didn't just record a concert, but really encapsulated a moment in history. Ultimately, we narrowed our influence down to Woodstock, and The Last Waltz, and used those more as our guides.

This epic piece of greatness features Reggie Watts, Kristen Schaal, Kurt Braunohler, Christian Finnegan, Leo Allen, Rob Paravonian, Nick Nace, Ann Enzminger, Marc Maron, and more. WANNA SEE IT!? Well SketchFest NYC is proud to present the New York City Premiere of Tell Your Friends! The Concert Film! at the Paley Center for Media on Thursday, September 22nd, 2011; at 7:30pm. After the movie there will be a panel moderated by Liam and feature Kristen Schaal, Kurt Braunohler, Christian Finnegan, Leo Allen, Neal Brennan, Jon Glaser, and Victor Varnado. Tickets are $10 for members and $15 for the general public UPDATE: and $8.00 to BV readers!

In unrelated comedy news, don't forget that FYF Fest is Saturday September 3rd in Los Angeles and features a pretty toupee-spinning bunch of comedy check out the full comedy line-up below.