Starred at The Paramount in July (more by Greg Cristman) 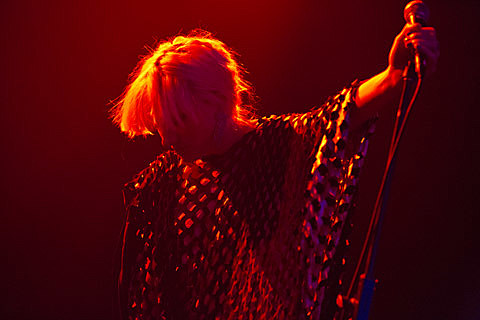 NYC goth label Pendu Sound has announced that it will do its CMJ showcase at Europa on October 17 this year. It's a lineup of all local duos, including Starred, Tempers, and Azar Swan (whose members were both in Religious to Damn). Tickets for the showcase on sale now.

Meanwhile, Tempers have other hometown shows coming up too, including a previously mentioned Union Pool (9/13) show with Xeno & Oaklander and Bootblacks (tickets); and another supporting Martin Rev (of Suicide) at his Glasslands (10/9) show with Infinity Shred (tickets). Stream their recent "Strange Harvest" single and their cover of Swans' "Killing For Company," below.

Meanwhile, Starred recently made a video for "LA Drugs" off 2012's Prison to Prison EP, and they had one of the standout tracks on this year's Sub Pop 1000 compilation. We recently caught them in Brooklyn and Long Island on their tour with Courtney Love.