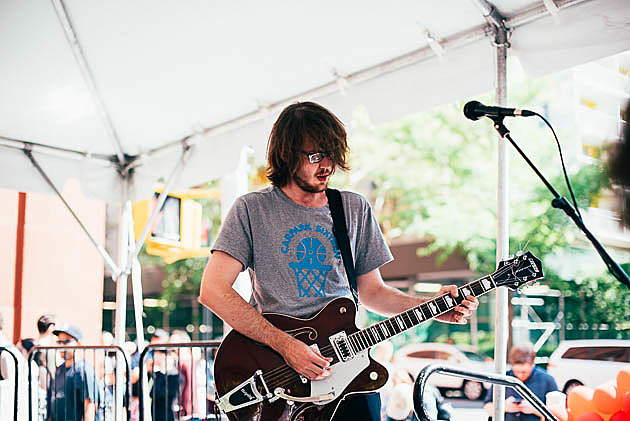 Asbury Park's Skate & Surf festival returned in 2013 after being inactive for eight years. This weekend (May 16 & 17) it's back for its third consecutive year, and the 2015 lineup is by far the best of the three. This year, there's only a few bands that we wouldn't want to see, so to narrow things down a bit, we made a list of the ten bands we're most excited to see at Skate & Surf 2015. Hopefully this will help you out if looking for some suggestions, or maybe it'll help you decide if you're on the fence about attending.

By the way, we're also giving away tickets. You can enter to win, and check our our list (in alphabetical order), below...

American Nightmare at Webster Hall in 2012 (more by Alyssa Tanchajja) 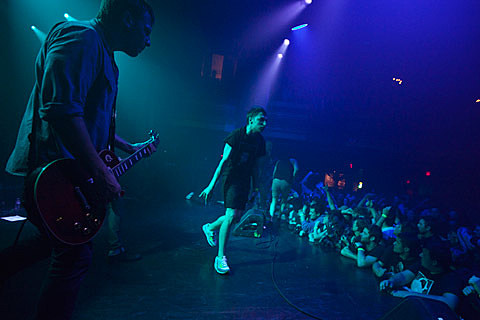 American Nightmare: American Nightmare (aka Give Up The Ghost) have been reunited since 2011, but chances to see them are still few and far between which makes their Skate & Surf set (their only upcoming date at the moment besides This Is Hardcore and Wrecking Ball) even more unmissable. The band is still led by original members Wes Eisold (who currently fronts Cold Cave) and Tim Cossar (also previously of Ten Yard Fight and The Hope Conspiracy), and their recent shows have been nothing short of wild. If you're unfamiliar, they put out two full lengths in the early 2000s (2001's Background Music and 2003's We're Down Til We're Underground), and along with bands like Converge and Modern Life Is War they helped establish a type of melodic hardcore that's still influential today. Touche Amore, Code Orange, Loma Prieta, and at least a couple bands on this very list are indebted to their sound.

Beach Slang: In this writer's humble opinion, Beach Slang were the best new band of last year. I ranked their two EPs as my second favorite album of the year (the only debut on the list), and the anticipation is pretty high for their first full length coming later this year via Polyvinyl. Though Beach Slang certainly were a new band last year, their members were familiar faces, having done time in Weston, Ex Friends, NONA and more. Their sound has its reference points (The Replacements, Jawbreaker, and fellow Replacements lovers Goo Goo Dolls), but when a band's as lyrically cathartic as Beach Slang, you soon stop thinking about who they sound like. "I hope when I die I feel this alive," goes one of their most memorable lines, and it's not unusual to feel that way at a Beach Slang show.

Cloud Nothings: Since 2012's Attack on Memory, Cloud Nothings have been crafting a mix of indie rock and post-hardcore that's heavier than most current bands tagged as the former, and simultaneously noisier and more hook-filled than most tagged as the latter. That 2012 album sounded like a successful morphing of Goo, Diary, Pinkerton and In Utero (with which it shared engineer Steve Albini), and its 2014 followup Here and Nowhere Else continued the band's progression so naturally that it was hard to say it sounded like anyone other than Cloud Nothings. Two killer albums aside, Cloud Nothings are also a furious live act. Jayson Gerycz is one of the best drummers in independent rock right now, and the band's lengthy noise jams are as mesmerizing as their poppier songs are pure fun.

Defeater: Defeater have been one of the leaders of the New Wave of Post-Hardcore for years, but something separates them from their peers. While Touche Amore, Title Fight, La Dispute and Pianos Become the Teeth all used album #3 to explore a wider sonic palette, Defeater used it (2013's Letters Home) to bring things back to their hardcore roots. They recently joined the growing list of great modern punk bands to join Epitaph, who will bring us LP4 later this year. We haven't heard a note of that yet, so the hope that maybe we'll hear something new at Skate & Surf makes this set even more anticipated.

Hot Rod Circuit: One of the more underrated bands from the late '90s/early '00s emo scene, Hot Rod Circuit are back once again for their first shows since their 2011 reunion. As many bands in the '90s emo scene did (which Texas Is the Reason's Norman Brannon recently spoke in depth about), they started as Superchunk followers, and HRC had a little Archers of Loaf in there too. That came across best on 2000's If It's Cool With You, It's Cool With Me, an album as good as any of the current "'90s indie rock revival" bands. But their real masterpiece is its followup, 2002's Sorry About Tomorrow -- recorded with the lineup that's now reunited -- which took that sound in new directions that were distinctly Hot Rod Circuit. And throughout all of their phases, Hot Rod Circuit's secret weapon was guitarist Casey Prestwood. Whether it's his guitar solo on "Supersad," his leads running through "Radiation Suit," or his experimentations with country music like the pedal steel on "Camo," Casey's playing was always something that separated HRC from their peers.

Iron Chic: Iron Chic were formed back in 2008 by ex-Latterman co-frontman Phil Douglas (one of the many bands to form out of Latterman's breakup). Their most recent album, 2013's The Constant One, is yet another great addition to the melodic punk sound Latterman were known for (which in turn was similar to the sounds Dillinger Four and Hot Water Music were known for). But what really made it stand out to me was its similarities to another band: Japandroids. Just about every song is a fist-pumping anthem the way Japandroids' Celebration Rock is, from the walls of briskly-strummed guitars to the shouted choruses of "Unwind! Get high! Say fuck the world, we're done with that!" If you're looking for that perfect mix of aggression and fun at Skate & Surf, Iron Chic is your band.

mewithoutYou: Lately the indie rock blogosphere has been reconnecting (or connecting for the first time) with a few of the post-hardcore bands who co-existed with indie rock during the '00s, but were erroneously considered to be significantly different. Brand New and Thursday have had their praises sung by indie types recently, but one band who toured with both of those bands on several occasions and really deserves to be talked about more is Philly's mewithoutYou. Like those bands, mewithoutYou explored increasingly diverse sonic territory as they went on. They began as a heavy, hardcore-inspired band with J. Robbins as a producer, and more recently hooked up with Danielson for a record that sounded like Neutral Milk Hotel. All of their records are good, but the best stuff came from 2004's Catch for Us the Foxes and 2006's Brother, Sister. Those albums positioned mewithoutYou as an art rock band, without losing the intensity of their hardcore roots. They've got a new album coming this year on their new label home of Run for Cover, and the new single has them sounding more like Brother, Sister than they have in years. We'll presumably hear even more of that album at their set this weekend. 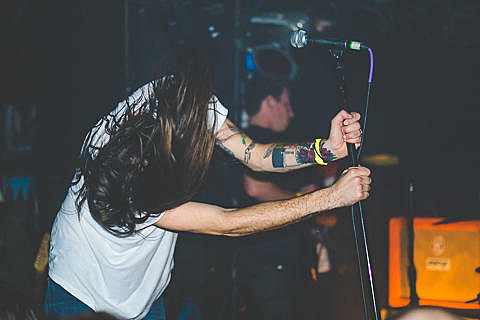 Pianos Become the Teeth: I mentioned it briefly above when talking about Defeater, but Pianos Become the Teeth's excellent third record Keep You (their first for Epitaph) was a huge change for the band, and it's their best yet. The band's first two records were heavily indebted to late '90s screamo, but for this one they stopped screaming entirely. That's a risky move for hardcore bands, but PBTT proved to be even better at writing pretty songs, and they're still very powerful. They're progressing as a live band too, and there's really never been a better time to see them than now.

Small Brown Bike: Like their No Idea labelmates Hot Water Music, Small Brown Bike began as a late '90s band blending punk, post-hardcore, and emo into a gravelly-voiced mix that remains influential today (just ask Iron Chic). They pretty much hit it out of the park right away with their classic 1999 debut, Our Own Wars; its 2001 followup, Dead Reckoning, cleaned up their sound ever so slightly but didn't lose the grit; and their 2003 album, The River Bed, saw them softening up a little but by no means losing power. They called it quits after that, but reunited in late 2009 and they've been in it for the long haul. A new full length came in 2011 and they've released rarities and reissued their collaborative 12" with their old pals The Casket Lottery since then. Live shows are still unfortunately rare though. They haven't played live at all since 2011, and their last time in NYC was 2010. So needless to say, catch them now while you can.

Superheaven: Superheaven (fka Daylight) started out back in 2009, releasing a few melodic hardcore EPs over the years, followed by a switch to something closer to alt-metal on their 2013 debut LP, Jar. They maintained a pretty solid fanbase in that time period, so I may be in the minority here, but I was never fully sold on the band until this year's sophomore album, Ours Is Chrome. It sounds something like if Title Fight's punk/shoegaze blend was injected with a serious dose of Smashing Pumpkins riffs (which also means it kinda sounds like Hum), and the band's songwriting has never been stronger. It might not be the most "original" music, but if you're looking for new alt-rock bangers like "Cherub Rock" or "Everlong" in 2015, you can't really do better than Superheaven's "I've Been Bored." Plus, even before I was fully sold on the music, I couldn't deny they were a killer live band.

One bummer is that two of these bands play at the same time (Cloud Nothings and Hot Rod Circuit), but nothing else on the list overlaps. (And you can also see Hot Rod Circuit with Small Brown Bike in Connecticut on Saturday.) You can head here to see the full lineup and set times.

Tickets for Skate & Surf are still available, and you can also win a pair through our contest, which can be entered BELOW: