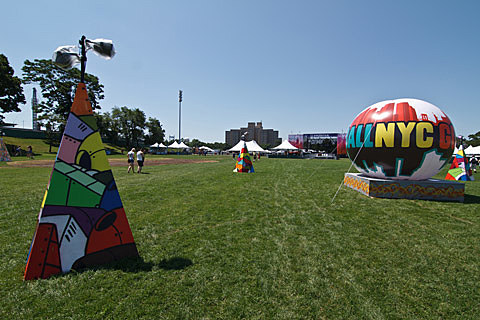 As mentioned, NYC music festival Governors Ball keeps growing and its returning this year for it's largest and most exciting festival yet on Randall's Island from June 7 - 9. Early bird 3-day passes go on sale today (1/25) at noon at $190, and once they sell out, they become $205 and then $220. According to the festival's website, single day tickets may or may not become available so if you'd like to go, they advise you purchase a 3-day pass.

The lineup has tons of great names this year and if you're going, we're sure you've got a bunch of stuff lined up to see already, and while you're making your wish list, here's our list of ten bands that we're excited to see at the festival, that you might not want to miss.

Kanye West is one of the headliners, and any chance to catch him in the NYC area is one to take advantage of. It's pretty amazing how far he's come and with seven albums under his belt (including Watch the Throne and Cruel Summer), he's got more than enough material for a hits-filled set, which he tends to do. And there's no telling what else he might do, like break out some snow monster masks or something.

A newer, but no less exciting rapper, Kendrick Lamar, will be there too. He turned the rap world on its head with last year's good kid, m.A.A.d. city, and us New Yorkers only got our chance to see him before its release. So now that we know all the words to his record, we pretty much can't wait to see him perform songs off of it at Governors Ball.

The term "supergroup" doesn't always mean the group is "super," just that the members are all known for other projects. But in the case of Divine Fits, featuring the songwriting talents of Spoon's Britt Daniel and Handsome Furs' Dan Boeckner, it was two great tastes that taste great together. And as a band, Divine Fits were pretty much amazing live right out of the gate, and their danceable vibe is festival-ready.

Deerhunter have been promising a new album for 2013 and while they haven't revealed any formal plans for it, we're hoping to hear some of the new material at Governors Ball. Plus, though we've seen side projects like Atlas Sound, Lotus Plaza, and Moon Diagrams in NYC recently, we haven't gotten an actual Deerhunter show since 2011.

Death from Above 1979 have played NYC a couple of times since reuniting in 2011, and whether you've caught them or not, it's a treat that they have another one on the horizon.

UK art rockers Alt-J became infinitely bigger since first coming to the US last May, and they've got the kind of songs that would sound great on a big outdoor stage. The band have been on tour constantly and we've seen their onstage confidence grow leaps over the visits they've already had here. They should be primed and ready for big crowds by the summer.

Japandroids have already come to NYC a few times in the past year (and those liars said it'd be a while before they came back!) and anyone who has seen them knows every Japandroids show is destined to be a wild time. The band is always nuts on stage and so is the crowd, so it's the kind of thing that will be a killer time at an outdoor festival.

Another band, like Alt-J, that have also had a pretty significant and quick rise since first catching our attention, is Polica, who will be at this year's Governors Ball. Their mix of indie pop and R&B is endlessly catchy and the dueling drummers are a thrill to watch live. Whether you're already a fan or not, they'd be a great band to catch.

Unlike many of the bands on the Governors Ball line-up, it's been a couple years since Australia's Cut Copy have played North America and absence makes the heart grow fonder. CC seem to write their songs with giant crowds in mind and show no shame in working the crowd into a frenzy.

Most of the artists on this list are artists we've been fans of for a while, but festivals are also always good places to discover new artists, and one new group we're excited to see at Governors Ball is Vancouver's Bear Mountain. Last year, they released their debut album, XO, which combined club-ready dance tracks, arena sized atmospherics, and an indie pop sensibility in the songwriting. It's a pretty great mix and sounds like it will be totally fun live. You can stream the album in its entirety below.