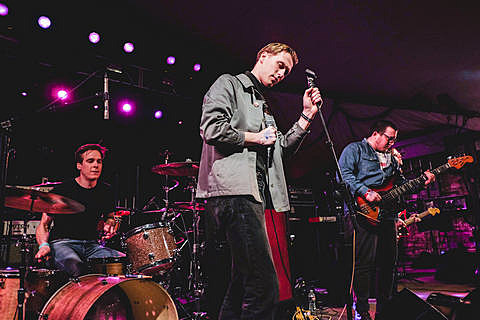 As you may well be aware, the The Northside Festival starts this week in Brooklyn, the music portion of which runs from Thursday - Sunday (June 12 - 15). Almost every venue in Williamsburg, Bushwick and Greenpoint are participating, making for a busier-than-usual weekend of showgoing. There are a bunch of high-profile shows happening -- Thee Oh Sees, The War on Drugs, CHVRCHES, Beirut, Courtney Barnett, Sharon Van Etten to name a few -- as well as, of course, the BV's official Northside Showcase which happens Friday (6/13) at Baby's All Right with Operators, the new band of Dan Boeckner (Wolf Parade, Handsome Furs, Divine Fits), plus Little Big League, and Motion Studies. But we've got some other recommendations, so below are 10 relatively smaller Northside shows we think are worth checking out.

Northside Music Badges have sold out -- you can still premium badges -- but tickets are still available to most shows. And if you have a badge, know that entrance is based on capacity so if you really really want to get into a show (like Courtney Barnett which is sold out), go early or buy a ticket if available.

You can keep up to date on Northside Fest happenings via their free IOS app which offers showtimes, maps and such.

Hope to see you at our show on Friday, and around the neighbor this week. Here are our Northside picks:

Titus Andronicus, Eagulls, D'NT, Low Fat Getting High @ Warsaw (Scenic Presents)
NJ punks Titus Andronicus always put on consistently great live shows, and lately they've been pretty generous with new material from their still-in-the-works rock opera. Of course we'll hear the old favorites (and maybe a few covers) too. UK post-punks Eagulls are still a bit one-dimensional with their sound (they only have one album and one EP), but they do that sound well and make this a great double bill. It's worth showing up for the local openers too.

Hunters, King Gizzard & the Lizard Wizard, Walter TV, Homeshake, Juan Wauters, Big Ups, DJ Jonathan Toubin @ Baby's All Right (Panache)
Panache booking put together this solid line-up of garagey, party-friendly bands. While most of them are local -- Australia's King Gizzard seem to be living here now -- it's notable for Walter TV, aka Mac DeMarco's other band. Actually's it IS his band, just in another configuration, with Pierce McGarry on guitar and lead. You can also catch Mac proper, at House of Vans earlier that same night, which is also part of Northside.

Perfect Pussy, Hop Along, Pleasure Leftists, Frankie Cosmos @ Saint Vitus (Pitchfork)
This one is stacked all around. NYC singer/songwriter Frankie Cosmos pulls from the twee pop of Beat Happening as well as the anti-folk of Moldy Peaches, yielding excellent results. Cleveland's Pleasure Leftists keep the "punk" in "post-punk" as their recent releases on genre-appropriate labels Deranged and Katorga Works have proven. Hop Along are currently one of Philly's best bands, with a mix of punk, folk, emo and indie rock that always gets the crowd singing along. And Perfect Pussy have one of the most intense live shows in punk right now.

Marissa Nadler, Pharmakon, Youth Code, Pyrrhon, Couch Slut @ Saint Vitus (Pitchfork)
Another stacked one from Pitchfork, and a highly diverse one at that. The haunting dream folk of Marissa Nadler should be a welcome complement to the punishing noise of Pharmakon (both have opened for Swans, for the record). Before that, it's Youth Code who do justice to the industrial and EBM sounds of the '80s. And before that is the freakish technical death metal of Pyrrhon (fronted by former BV writer Doug Moore) and the sludgy hardcore of Couch Slut.

Lust For Youth, Pharmakon, Container, Croatian Amor, Uniform @ Baby's All Right (Sacred Bones / AdHoc)
Vitus isn't the only place to catch Pharmakon on Saturday. She also plays the Sacred Bones/AdHoc late night party (10 PM) at Baby's, a mostly noisy but still diverse bill. Copenhagen's Lust For Youth offer a take on post-punk more in the synth pop realm than their neighbors Iceage and Lower, but otherwise just as moody. Container's beats are danceable, but he drowns them in a noise assault. Croatian Amor is the project of Lust For Youth member Loke Rahbek (he also used to be in Var), though here he works more in the ambient realm. And lastly, Uniform is the new-ish duo of Ben Greenberg (The Men, Pygmy Shrews, Hubble) and Michael Berdan (Believer/Law, Drunkdriver, Veins), who also favor blistering noise, but do have some slight bit of songcraft.

Ski Lodge, Literature, Lushes, My Teenage Stride, Chalk & Numbers @ Union Pool
For a sunnier Saturday option, Union Pool is hosting a solid lineup of indie pop, headlined by Ski Lodge who are currently working on their second album. Also on the bill are Philadelphia's Literature, whose excited brand of jangle has them bouncing off the walls, plus NYC indiepop vest My Teenage Stride, the vintage '60s pop sounds of Chalk & Numbers, and more.

Fuck Buttons, Lichens, Odonis Odonis @ Warsaw (Brooklyn Bazaar / The Bunce Group)
UK duo Fuck Buttons -- who are still noisy but have allowed some traditional pop structure on their new album -- will be debuting their new AV show on this tour, including this Northside show. Check out a video of their AV setup below. If you're going, do get there early to check out Toronto's Odonis Odonis who make superior goth/industrial rock.

Swearin', Radiator Hospital, Flesh Wounds, Bent Shapes @ Glasslands (PopGun)
Swearin' and Radiator Hospital (who share drummer Jeff Bolt) are both makers of excellent indie rock that throws a bit of pop punk and bedroom folk into the mix too. The Merge-signed Flesh Wounds make the kind of garage rock that any fans of Thee Oh Sees and Ty Segall will likely dig. And Boston's Bent Shapes make '90s-style indie pop which is a little harder around the edges than other bands in their realm.

And just one last note, if you'll be show-hopping in Brooklyn this weekend, there will be a few other great places to hit that aren't part of Northside too, including the $5 Crow Bait / Beach Slang show at Suburbia, the tiny, sweaty Thee Oh Sees show at Death by Audio, Celebrate Brooklyn's free Ornette Coleman tribute in Prospect Park with Flea, Laurie Anderson, Patti Smith, Thurston Moore and others, Grrrl Fest, and more.