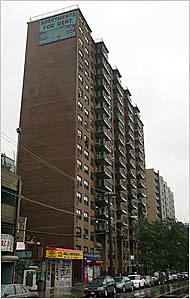 The building, at 1520 Sedgwick Avenue, would be just another one of the flurry of Mitchell-Lama buildings that have changed hands over the past few years, were it not for its community room. It was there, in 1973, that Clive Campbell, known as D.J. Kool Herc, started turning the tables at community parties, producing a sound, a rhythm and a style that spilled out into the nearby parks and streets and, later, to the world. Mr. Campbell was living in the building at the time with his sister, Cindy Campbell. [NY Times]