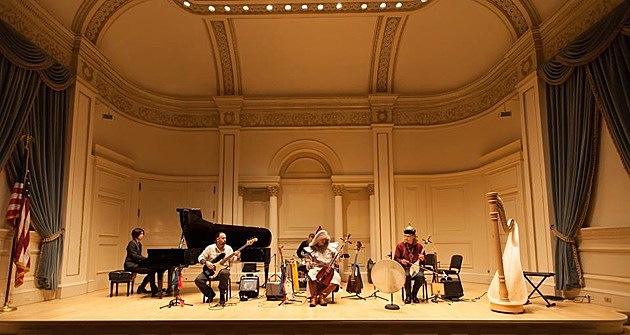 If you missed the world-famous Mongolian folk metal band Tengger Cavalry last time they played Saint Vitus, not to worry, as you'll have a chance to catch them at the same venue on January 27 with support from Gothic Knights and Winter's Wake. Tickets for that show are on sale now.

On Christmas Eve, Tengger Cavalry became the third metal-related band to play Carnegie Hall (and they sold it out). Loudwire caught the show and wrote:

It was the band's first unplugged concert and the first part of the show proved to be delicate, tender and melodic. Tengger Cavalry donned traditional Mongolian outfits during their set, making for an interesting visual. Frontman Nature Ganganbaigal plays a variety of nomadic Mongolian instruments -- the Mongolian fiddle also known as the Morin Khuur, Mongolian flute and the Mongolian guitar (Tovshuur) -- giving each instrument his all. After moving from China to New York City he also reconstructed the band with new members hailing from the States. The lineup includes Tuva fiddle player Robert McLaughlin, bassist Alex Abayev and drummer Yuri Liak.

After a 10-minute intermission, Tengger Cavalry graced the staged once again but this time in their favorite bands shirts ready to rock out for a much heavier set with amps and all. They even slipped in "Jingle Bells" for the crowd to get into the holiday spirit. The mostly instrumental set was lively to say the least but there's nothing that completely mesmerized more than the Mongolian throat singing.

You can check out some pictures and video of that historic event below...