Tennis at the Bell House in 2011 (more by Jessica Amaya) 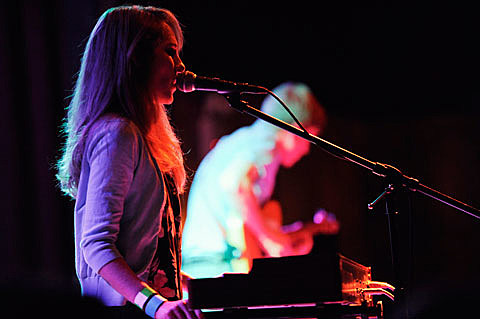 As mentioned, Tennis will welcome their sophomore LP, Young and Old, on February 14 via Fat Possum and tour in support of it in February and March. When we first announced that tour, it was scheduled to hit NYC on March 3 at Bowery Ballroom. They've since added another NYC show happening on March 5 at Music Hall of Williamsburg and Hospitality has been added as an opener to both shows. Tickets for the Bowery show are still available and tickets for the MHOW show go on sale Friday (1/27) at noon with an AmEx presale starting Wednesday (1/25) at noon.

Speaking of Hospitality, who have a new video and are streaming their debut LP on Spotify, you can catch them in NYC even sooner at their record release show at Glasslands on February 3 with Glass Ghost and Dustin Wong. Tickets are still available.