Tennis at Glasslands in August (more by Jessica Amaya) 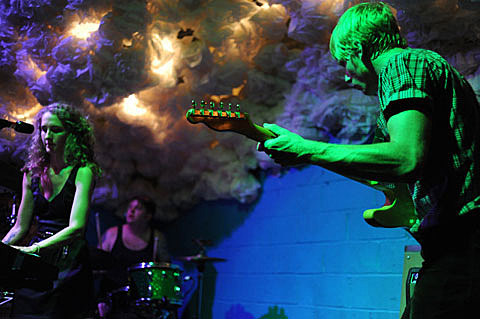 Concept albums are nothing new, but the story behind the latest seven-inch from the band Tennis feels pretty fresh. The summery, lo-fuzz songs on the "Marathon" EP, which was released.. on Underwater Peoples, are based on the sailing trip taken by the husband-and-wife duo Patrick Riley and Alaina Moore in 2009 -- an eight-month journey along the East Coast that took them from "Bimini Bay" in the Bahamas through "Marathon" Florida, "South Carolina" and up to "Baltimore" on their 30-foot "Cape Dory." Not bad for two kids from Denver who'd never sailed before -[New York Times]

Denver's Tennis are going on tour in December. That tour, includes two shows with the Walkmen. One of those two show is the December 2nd gig atTerminal 5 (the other is in DC). Tickets for the NYC show, which School of Seven Bells are also opening, are still on sale.

You don't need to trek all the way to T5 to see the band named after a sport though. They will also will headline a show of their own at Mercury Lounge the night before (12/1). Tickets are currently on AMEX presale, and go on regular sale at noon Friday (10/15). All dates below.

School of Seven Bells meanwhile will be around for CMJ.

Tennis's Marathon 7" is sold out via Underwater Peoples, but the band recently popped by Daytrotter to bless them with "Cape Dory" from that effort, as well as three other live jams you can download for free.

All current tour dates with some videos below...