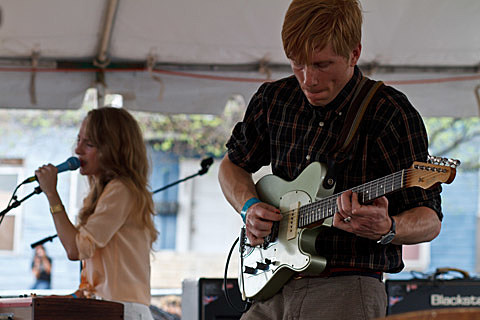 Tennis were last in NYC on their tour with Hospitality for two sold out shows in March, before both making their way to Austin for SXSW where they played Hotel Vegan and the Carson Daly showcase.

Tennis will be in NYC again next week to perform on Letterman on 4/9. While they're here, they'll play a show at Brooklyn Bowl on April 10. Tickets for that show are on sale now. All dates are listed below...

Tennis were recently on other late night TV shows as well, having performed "Origins" on The Tonight Show and aired footage from SXSW on Carson Daly. Videos from both of those performances along with all dates below...

--
Tennis - "Origins" on The Tonight Show