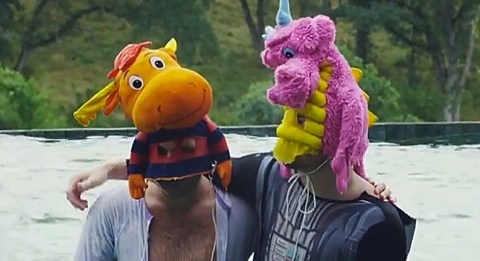 Melodic math rockers Tera Melos released their solid X'ed Out album last year via Sargent House, and just gave one of its tracks, "Slimed," video treatment. The video follows a couple of costumed guys with a shitty acoustic guitar from the shower to the swimming pool, and shows all their antics (including playing with a dolphin fountain) along the way. The video premieres in this post and you can check it out below.

As briefly mentioned, Tera Melos are also touring with The Dillinger Escape Plan and Vattnet Viskar this year, which is a pretty great triple bill. The tour doesn't hit NYC, but it will be nearby for shows at Amityville, NY's Revolution Bar & Music on 5/9 (tickets) and Hartford, CT's Webster Theater on 5/10 (tickets).