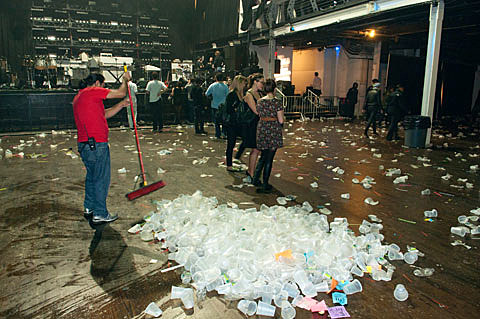 "In New York City, Terminal 5, a 3,000-person venue, has an advantage over similarly sized local theaters. Because it's owned by a local promoter, Bowery Presents, much of the infrastructure -- stage hands, lighting, sound, security, things a band would have to pay for elsewhere -- is in place. This means, Barger says, bands "can make a higher percentage of the earnings in that one room than in any other room in NYC." So even if your favorite mid-sized band would prefer to play a larger venue, one with different acoustics, or one in a different part of town, Terminal 5 can be difficult to resist." [NPR: "The Concert Ticket Food Chain: Where Your Money Goes"]

Cut Copy play their third show in a row at Terminal 5 tonight. The Hold Steady headline the room on Friday. Tickets are still on sale for the latter.

LCD Soundsystem just played there four times. Bao Nguyen was there at the final one, and he made the special video of the last song, which you can watch below...

--
LCD Soundsystem - Terminal 5 - New York, I Love You but You're Bringing Me Down