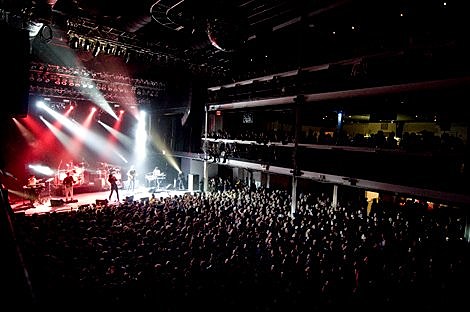 This has already come up in the comments, and has been posted on a few other sites. Just to be clear, Pollstar's venue ranking is measured in ticket sales. Terminal 5 sold the third most concert tickets of any "club venue" in the world in 2009. They were beat only by the 9:30 Club in DC and House of Blues in Boston (clubs who have more shows coming up in February than Terminal 5 has total on its schedule total right now). Pollstar writes...

When a New York City club that didn't exist three years ago showed up as No. 3 on the latest Top 100 Worldwide Club Venues, we had to take notice.

That's above names like The Fillmore, The Wiltern and every House of Blues in the country other than the one in Boston. It became a running joke in this office to ask, "What's Terminal 5?"

Of course, plenty of agents, artists and production crews are familiar with the venue by now. The 3,000-capacity facility opened in the New York island of Manhattan in the fall of 2007 and has become the new room for up-and-coming acts.

It is also the "next step" for Bowery Presents, which manages a series of well-known venues in the NYC area - the 250-capacity Mercury Lounge, the 500-capacity Bowery Ballroom, the 600-capacity Music Hall of Williamsburg and the 1,400-capacity Webster Hall.

Nokia Theatre in Times Square is #16 on the list. Starland Ballroom is 18, Irving Plaza 23, Hammerstein Ballroom 28, Webster Hall 30, Music Hall of Williamsburg 35, and Roseland Ballroom 55. Bowery Ballroom is noticeably absent from the list which is reportedly because they don't report to Pollstar.

Speaking of Terminal 5, tickets went on presale today for Sia and The Specials. The full list of 18 upcoming shows is at Ticketmaster (which recently confirmed they'd be merging with Bowery Presents' biggest competitor Live Nation).

The full list of 100 venues (that report to Pollstar), along with some videos, below... 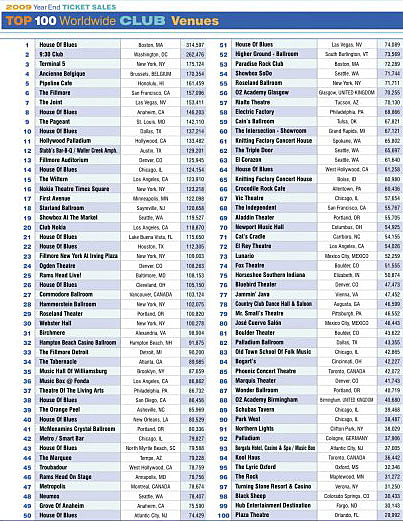