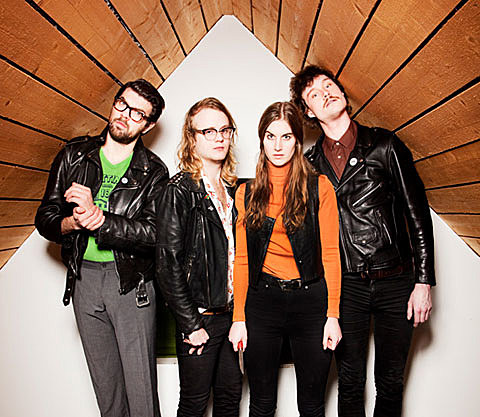 Just a reminder that Sweden's Terrible Feelings are in town tonight playing Death by Audio with Death First, Plastic Cross and These Days. If you can't make tonight's show, the band will be back on the tail end of their US tour, playing Acheron on June 30. All tour dates are listed below.

Since we last wrote about them, Terrible Feelings released their new album, Shadows. While the songs are hook-laden and very catchy, you can feel the punk DNA in there. The band have made fans of JEFF the Brotherhood and Fucked Up on European tours and I am told they have a killer live show. You can download two tracks off the album and stream the whole record below via a Spotify widget.

Meanwhile, Terrible Feelings' Derranged Records labelmates White Lung are currently wrapping up a short stint out with Ceremony but will be in NYC on June 28 for a show at Tommy's Tavern with Nude Beach, Casanovas in Heat, California X. The Vancouver band make strident pedal-to-the-metal, punk-fueled rock with strong vocals from singer Mish Way. You can stream their album, Sorry, at the bottom of this post. All tour dates are listed below.