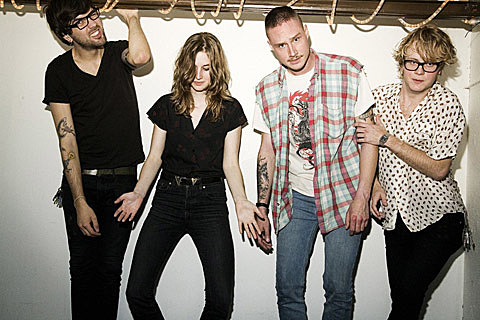 After a string of 7" and EP releases, Terrible Feelings are preparing to release their debut LP Shadows via Deranged Records/Double Sun Recordings. The Swedish band, which toils in garage punk-infused power pop, have released a new video for "Intruders" from the effort and you can view that clip below. Look for Shadows in the US in mid-April via Deranged on vinyl and on CD via Double Sun.

Catch Terrible Feelings on the road on the East Coast this summer including TWO NYC dates: Death By Audio on June 19th with Death First and Acheron on June 30th with Sad Boys, Nuclear Spring and Mutant Genes.

More details on both shows are on the way and their full tour routing is listed below, but they need more help. If you can help with a show, send an email to freewheelbooking at gmail. All current tour dates, that "Intruders" video and streams of previous material. below....