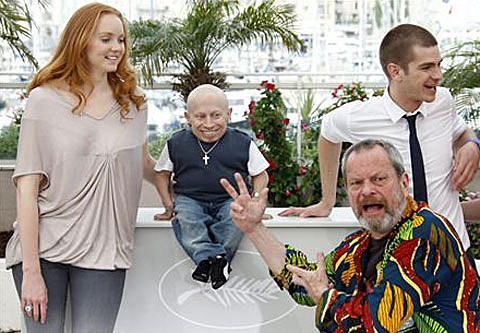 NY TIMES: Are you a big indie-rock guy?

TERRY: No! I mean, most of it's [bad]. I just happen to like Arcade Fire. The world of indie is such a funny thing now. I think everybody's in it. Otherwise you're just the dependent rock world. I think half the indie bands are owned by some big company. So it's a complete lie. I don't know why Canada produces some rather interesting work. Arcade Fire, Sunset Rubdown, Wolf Parade -- these are my favorites....

...NY TIMES: How do you film something like [an Arcade Fire show at Madison Square Garden], that's so elaborate, and has all these potential interpretations?

TERRY: These shows, there's a machine, in a sense, that runs them. I've never done multicamera work, so I'm just advising people: Look at the video work they've got up on the screen; it's raw and it's overexposed, and almost the antithesis of what I do when I make a film. So let's use that, and basically throw away the slick stuff that's normally done at, say, a Britney Spears concert. Let's just be true to what the band wants to do.