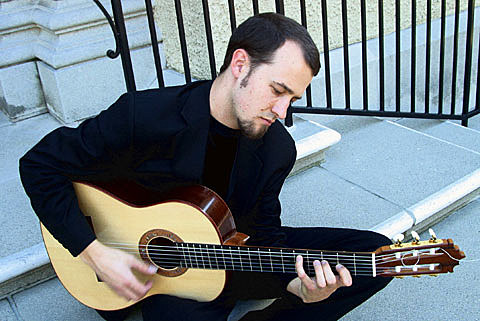 Terry and Gyan Riley have been performing together since the late 90's and have appeared in concert throughout the USA and Europe. The music has a connection to the improvising traditions of both Jazz and Indian Classical but more importantly depends on a synchronous intuition that has developed between a father and a son. Sometimes they begin with a structure where melodic, harmonic, modal and rhythmic elements are predetermined along with a flow chart of sequential events but one of their favorite forms is starting from a place where neither performer has an overview and they must find their way together. Terry on piano, keyboard and vocals, has been on the worlds stages for over 50 years. Gyan has generated a lot of excitement with his astounding guitar virtuosity and his brilliant compositions. In 2011 they appeared at All Tomorrow's Parties in Minehead England and at Moogfest in Asheville, North Carolina.

Gyan Riley can also be found this month at the Stone, where he curated the second half (May 17 - 31) of venue's May programming. (Buke & Gase handled the first two weeks.) Riley's run kicks off Thursday, May 17 with a solo performance by Tracy Silvermann who uses loop pedals to create soundscapes with her six-string violin. The late show that night is BLIXT aka Bill Laswell (bass) Morgen Agren (drums) Raoul Bjorkenheim (guitar).

Other highlights include Ian Williams of Battles on May 19, guitarist Charlie Hunter and drummer Scott Amendola on May 22; pianist Jenny Lin playing works from various Merce Cunningham composers on May 23; Riley and percussionist Dave Cossin performing as Superballs! on May 26; and Bang on a Can/Paul Simon cohort Mark Stewart on May 27.

Full schedule for the Gyan Riley-curated second half of May at The Stone is below.

5/27 Sunday (JI)
8 pm
Mark Stewart
Mark Stewart (guitar) and friends
Guitarist/multi-instrumentalist for Bang on a Can and Paul Simon stretches out with some new music.