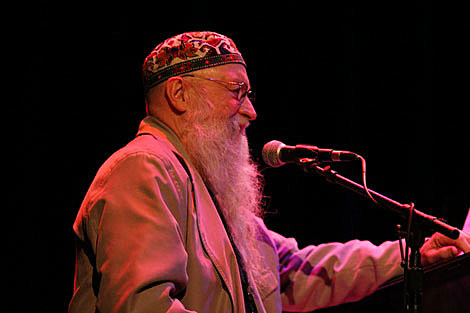 Composer Terry Riley is perhaps an unlikely addition to the Animal Collective-curated ATP happening in the UK in May. Maybe not, considering the minimalist influences in Animal Collective's music, though it's still be weird to see the 75-year-old Riley, who tends to play organ or keys live, billed under Big Boi.

You can see the composer at a more typical setting - (Le) Poisson Rouge - tonight (Jan 29th) with son Gyan Riley, who's a skilled guitarist, composer and improviser in his own right. Tickets are still on sale.

The pair will be celebrating two new albums: Gyan's solo guitar release Stream of Gratitude on Tzadik Records and Terry Riley and Gyan Riley: Live on Sri Moonshine Music. Parts of both are streaming on Gyan's website.

More upcoming Gyan Riley shows (some with Terry) including February 6th at Pianos, are posted below...