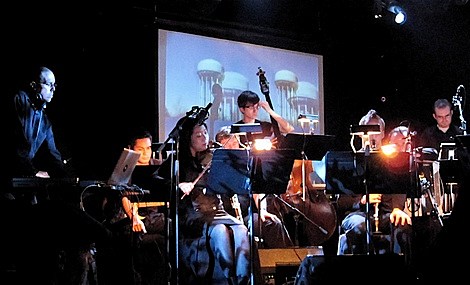 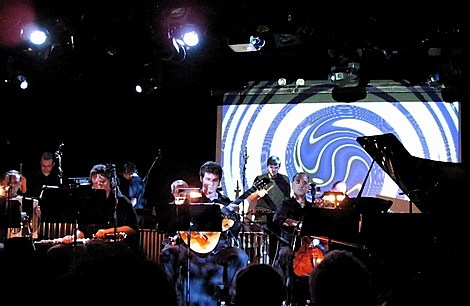 As its length [about an hour] suggests, this was a leisurely "In C," and it began [at Le Poisson Rouge on Sunday the 8th] with a prelude of sorts: a rich aural haze surrounding a honking, spirited saxophone line that darted about for five minutes before the steady, pulsing C signaled the start of Mr. Riley's work. The ensemble, which included standard strings and woodwinds, as well as a few guitars, an accordion, a piano and percussion, moved between extremes of dense, flowing textures and transparent pointillism, with Mr. DeSantis's additions -- including what sounded like instrumental sounds played backward -- occasionally providing otherworldly effects.

By design, "In C" sounds different in every performance, and this was as good a reading as many, but not the best I've heard: that distinction is still held by the vigorous Darmstadt performance at Galapagos in 2007. [NY Times]

That's a review of the 'In C Remixed' album release concert that took place at (Le) Poisson Rouge on Sunday, November 8th. The night's performers, Grand Valley State University New Music Ensemble, were joined by 'remixer' Dennis DeSantis on laptop and electronics. The piece moved casually and steadily, and wasn't without its charms (the opening sax breakout noted above was an especially warm introduction), but my only regret was not finding a chair for the hour-long take. The two pictures here are from that show. 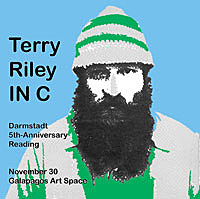 The 2007 "best" In C performance referenced above will happen again when the Darmstadt series brings "In C" back to Galapagos on Monday, November 30th. The performance celebrates the five year anniversary of the series, which is curated by Nick Hallett and Zach Layton. For the piece they've recruited "a battery of avant-guitar gods (David Grubbs, Alan Licht among them), veteran composer-performer Jon Gibson (who played in the very first performance of In C), singers, instrumentalists across a wide span of tones and timbres, electronic musicians....all keeping to the beat of drummer Ryan Sawyer." All that and visuals by Joshua Light Show (who did the trippy background for Yo La Tengo at Roseland in September). Tickets (only $10+fees) are on sale.

On December 3rd, 4th & 5th, Darmstadt: Classics of the Avant Garde series will bring its second annual "Essential Repertoire" festival to the Issue Project Room. The theme for this year's fest focuses on the "30th anniversary of the seminal New Music New York concerts curated by Rhys Chatham and held at The Kitchen, which put the still-burgeoning Downtown Scene...under a mainstream spotlight and redefined the presentation of experimental music." The concerts are programmed accordingly, with music from "'Blue' Gene Tyranny, Connie Beckley, David van Tieghem, Jill Kroesen, Jon Gibson, Ned Sublette, Peter Gordon, Peter Zummo, Petr Kotik, Phill Niblock, and a performance of Meredith Monk's Dolmen Music by the M6 (who are at the Stone in December). Advanced tickets for night one are on sale, but not for two and three.

If more Terry Riley is your thing, he's been announced as the artist-in-residence at this year's Big Ears Festival in Knoxville, TN, March 26th-28th. A retrospective of his work will take place during the fest, and that'll be sure to include "In C." Tickets and more info TBA.

More details on Darmstadt and a clip from last year's festival are below...

This year's festival celebrates the 30th anniversary of the seminal New Music New York concerts curated by Rhys Chatham and held at The Kitchen (then on Mercer Street), which put the still-burgeoning Downtown Scene - at the crossroads of minimalism, interdisciplinary performance, and various strains of post-punk - under a mainstream spotlight and redefined the presentation of experimental music.

DARMSTADT's cross-section of composers involved in the original festival includes "Blue" Gene Tyranny, Connie Beckley, David van Tieghem, Jill Kroesen, Jon Gibson, Ned Sublette, Peter Gordon, Peter Zummo, Petr Kotik, Phill Niblock, and a performance of Meredith Monk's Dolmen Music by the M6. Invited composers have been asked to present compositions of theirs from the 1970s, if not the actual pieces presented at the original Kitchen concerts. The festival will be held from December 3 through 5 at ISSUE Project Room. All concerts begin at 8pm. Tickets will be $20 at the door/$15 advance (available online at http://www.issueprojectroom.org or for cash purchase at Other Music.)

"Blue" Gene Tyranny - "Harvey Milk (Portrait from 'How to Do It'/A circuit to help generate the feeling of meaning)" (1978), "The White Night Riot" (1979); Electronic sound pieces prepared by the composer (in attendance), special guest performers TBA

Petr Kotik - Excerpt from There is Singularly Nothing (1973); Performed by the S.E.M. Ensemble with special guests

Jon Gibson - Criss Cross (1979) and other works; Performed by the composer

Phill Niblock - "Four Arthurs" (1978) superimposed with "Two Octaves and a Fifth" (1975); performed by the composer with Leslie Ross (bassoon) and Christa Robinson (oboe)

Peter Zummo - "Minesweeper" (1979), "With Ease She Darts These Bees and Sees" (1979), "Blinded By the Sun" (1979); Performed by the composer with Bill Ruyle (percussion), Mustafa Ahmed (percussion), and Stephanie Woodard (reading)

Ned Sublette - Songs TBA; Performed by the composer and guests

Jill Kroesen - Songs TBA; Performed by the composer and the Love of Life Orchestra

ESSENTIAL REPERTOIRE at ISSUE Project Room
(at the Old American Can Factory), 232 3rd Street (at 3rd ave), Brooklyn NY 11215
Thursday, December 3 through Saturday, December 5, 2009
All performances begin at 8pm
Tickets $20/at the door, $15 in advance (available online at http://www.issueprojectroom.org or for cash purchase at Other Music)
F, M, R to 9th Street-4th Ave