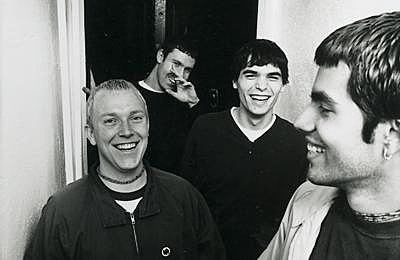 "NYC punk legends TEXAS IS THE REASON are pleased to announce their plans to reunite for one night, November 25th, at New York's famed Irving Plaza. The band, whom abruptly broke up in early 1997 while on tour in Bielefeld, Germany, decided it would be the best way to offer closure on the whole experience — on both a personal level and for their fans. 'Texas Is The Reason did everything in broad strokes,' explains guitarist Norman Brannon, 'so breaking up when we did, quickly and silently, felt like an extension of that. The one thing we all agreed on, even back then, was that our last show should have been in New York City. We've had reunion offers in other states, but we turned them down. This show has been in the back of our minds for a long time."

"Texas Is The Reason was founded in late 1994 by Brannon, a former Shelter guitarist, and 108 drummer Chris Daly; bassist Scott Winegard and frontman Garrett Klahn rounded out the quartet. After the release of a three-song EP, Texas Is The Reason became an underground smash. A split single with Samuel for the UK-based Simba label quickly followed before the band released their first and only full-length album, Do You Know Who You Are? — named after the last statement JohnLennon allegedly heard before he died. Produced by Jawbox's J. Robbins and released through Revelation Records, Do You Know Who You Are? brought major-label courtship and widespread visibility for Texas Is The Reason, who were being hailed as the 'next big thing' in the growing punk explosion on MTV. After issuing a final split single with The Promise Ring through Jade Tree Records, and on the eve of signing with one of the major labels in 1997, intra-band tensions
arising from these newfound pressures eventually caused the band to split.

With their past clearly behind them, the original members are excited to play for the right reasons again. 'This is the first time in ten years that we've actually found ourselves living in the same city at the same time,' Brannon says. "But ultimately, we wouldn't be doing this if we didn't think we could do it right. It's that 'broad strokes' thing, really — we're thinking of this as less of a concert and more of a spectacle."

Presale tickets are available between September 22-29 online only via itishappeningagain.com or texasisthereason.org