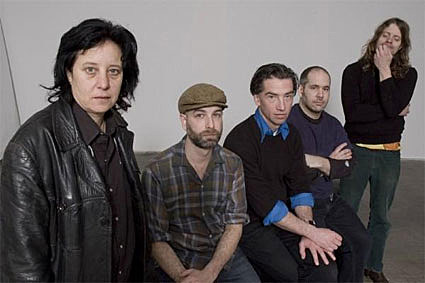 Live Skull created abrasive no wave music not unlike their 1970s and 1980s contemporaries Sonic Youth, Swans, Rat At Rat R, The Chameleons, Mars, Teenage Jesus & the Jerks and Band Of Susans. Their music featured angular guitar parts interspersed with bleak, quieter passages, for a haunting overall effect. The lyrical subject matter was usually as pessimistic and harsh as the music itself. Live Skull never achieved mainstream recognition, but retain underground notoriety and share a family tree with other relatively noteworthy groups. [Wikipedia]

Thalia Zedek was in Live Skull from 1987 to 1990. That's when they broke up. Before Live Skull she was in Dangerous Birds and Uzi After Live Skull there was Come, and there have been various other projects since. The most recent one is a band she put together for an album called "Liars and Prayers" that came out on Thrill Jockey in April. Now she's on tour with this band, and you can catch her tonight (Friday the June 13th) at Union Pool with Major Stars. I wonder if she knew that Teenage Jesus & The Jerks were playing in town the same night when she booked the gig. If you miss tonight, there's also June 18th at Mercury Lounge. All dates below...