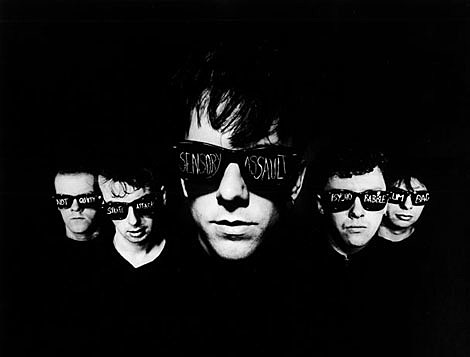 There's always one band at SXSW that makes you do a double-take when you see them on the schedule. For me it was That Petrol Emotion, who were popular in the late '80s (on college radio at least) and broke up in 1994. They were the band the O'Neil brothers of The Undertones formed when Feargal Sharkey left in 1983, recruiting Seattleite Steve Mack for vocals. The crowd to see them in at 1AM was sparse, but included Bell House / Union Hall booker Skippy, Britt Daniel and Andrew Bird. Sound was a bit of a mess, but the band played great - vocalist Steve Mack was still manic as ever, and they played my favorite TPE song, "It's a Good Thing."

That Petrol Emotion were one of my favorite shows at SXSW this year, and now the they'll be back in the U.S. playing The Bell House on December 12. This will be TPE's first New York show in 15 years -- tickets are already on sale. It's their only upcoming U.S. show as of this writing. While the SXSW set I saw focused mainly on the band's more straightforward final two albums (1990's Chemicrazy and 1993's Fireproof), I'm hoping the Bell House folks will try and get them to break out some of TPE's jagged early stuff like "V2" (from their essential first album Manic Pop Thrill) or "Creeping to the Cross" (from 1986's Babble).

Some classic TPE videos, plus footage from that SXSW show, are below...