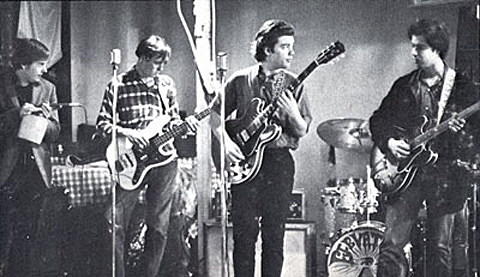 Austin psych legends The 13th Floor Elevators are reforming to play -- where else? -- Austin Psych Fest's rebranded Levitation which goes down May 8-10 at the Carson Creek Ranch. The performance will feature the four surviving original members (Roky Erickson, Tommy Hall, John Ike Walton, and Ronnie Leatherman), and it's the first time they have all played together since 1968. That's pretty exciting. Levitation, which was named after the Elevators song, already had a killer lineup with he Flaming Lips, Tame Impala, The Jesus and Mary Chain, Primal Scream, Spiritualized, Lightning Bolt, Melody's Echo Chamber, Fat White Family, Metz and tons more. Tickets and weekend passes are still available and daily lineups are listed below.

The Austin Chronicle interviewed the Elevators' Tommy Hall who was the band's primary lyricist and also, as importantly, their pioneering electric jug player, with a fluttering style that few have dared to duplicate since:

Do you still play electric jug?
"No I don't. I've spent all my time doing all this work," he says, referring to his journey of understanding the mathematical expressions of the universe, which he characterizes as a "quasi material abstraction." "But I'm going to practice the jug and hopefully I can be as good as I was."

Do you expect the Elevators' message to connect with the new generations of fans seeing you at Levitation?
"Yeah, sure. When we we're going on we weren't very appreciated, but now the young people dig us. With the younger generations' knowledge and their use of weed for good purposes, they understand the information. Once we have these ideas, it should change us physically.

Check out Hall in action with The 13th Floor Elevators in classic television performance videos -- as well as an Rdio stream of Elevators/Roky Erickson tribute album Where the Pyramid Meets the Eye (featuring Primal Scream, JAMC, and more) below.