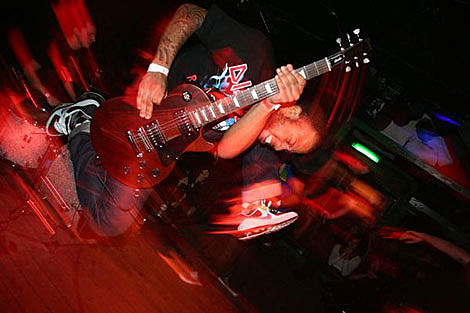 It's here. I hope you got your sleep this past weekend.... you're gonna need it with all the riffage going around. May we present... the day to day guide to heavy at CMJ 2008, below....

* PICK: CMJ Solid PR & 1000 Knives Presents: The Bronx, Trash Talk, Akimbo at Fontana's. One crew of bad mother-punkers kick ass with the sickening hardcore of Trash Talk and the beer-soaked Akimbo. Akimbo is also playing The Brooklyn Vegan party at Knitting Factory on Sat Oct 25th (and a lot of other times).

* Trash Talk, Black Anvil, Alpha & Omega, Flesh Temple @ Europa. Yes, Trash Talk is that busy but they pretty much own you and in this go around, they bring along tourmates Alpha & Omega and local badasses Black Anvil. 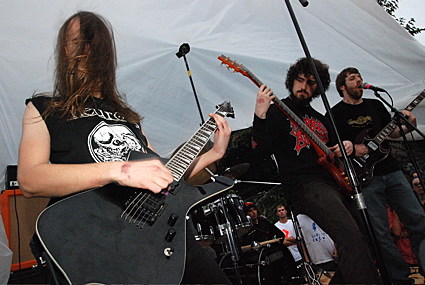 * PANEL: Current Independent Culture Through the Eyes of True Indie Pioneers @ Kimmel Center. A discussion with Walter Schreifels, Craig Wedren, DJ Spooky, and Dave Allen about the decline of the major label system and where indie music is headed.

* Five Finger Death Punch, In This Moment, Bury Your Dead, Another Black Day @ Irving Plaza. If thats you're kind of thing, I guess. Tickets are on sale. 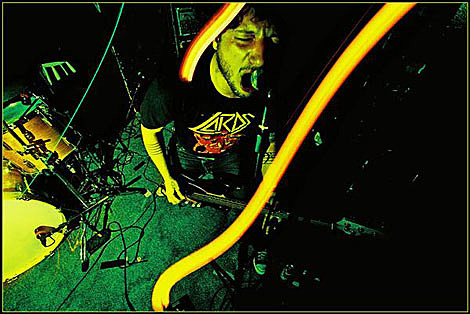 * PICK: Panache Showcase: Akimbo, Monotonix, DMBQ, The Mae Shi, An Albatross, Aa, Fiasco, and many many many others @ Knitting Factory. Akimbo, in their 4762nd appearance at CMJ 2008, will destroy your mother with An Albatross, DMBQ, Aa, and so many other bands that I would rather not get carpal tunnel syndrome attempting to re-write them all. Details here, tickets are on sale.

* PANEL: The Changing Face of Metal: Evolution or Identity Crisis? @ Kimmel Center. A discussion about the changing face of metal with Guy Kozowyk from The Red Chord, Harlan Frey, Kevin Lyman, and Ben Umanov.

Trap Them, The Perennial, Hinges @ Stolen Sleeves Collective. Trap Them will also be appearing at The Brooklyn Vegan Day Party on Sat Oct 25th!

* PICK: Rival Schools (5pm), Made Out Of Babies (4pm), Akimbo, Trap Them, Vried and manay bands that don't fall within the "heavy" category @ Knitting Factory (all floors). Come on guys. Rival f'n Schools AND Made Out of Babies? Not to mention Trap Them? And it's FREE? (And it's our party!) (noon-10pm)

* The Syndicate & Bitpom present Darkest Hour, God Forbid, Warship, Thy Will Be Done @ Fontanas. Darkest Hour get small. Reeaaaallly small. Could be interesting. $10