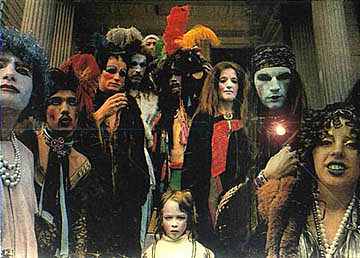 Though free shows are becoming scarcer and scarcer in NYC as September approaches, September 6th now offers three all-day possibilities. This one is part of the annual LES Howl! Festival, takes place in Tompkins Square Park, and looks sort of like this:

That's just the schedule of one stage on one of the three days though. The rest of the Tompkins Square Park part of the schedule can be found on Howl's very confusing website.

The other free shows on Septmeber 6th are the East Village Radio Fest at South Street Seaport and the Monser Island Block Party in Brooklyn.

a psychedelic drag queen troupe founded by Hibiscus in the late 1960s in San Francisco's North Beach neighborhood. The troupe performed outrageous parodies of show tunes (or original tunes in the same vein) and gained an underground cult following that led to mainstream exposure.

... (...how many original members there still are I'm not sure...) are also playing a few shows at The Theaters at 45 Bleeker Street (in addition the one in the park listed above).