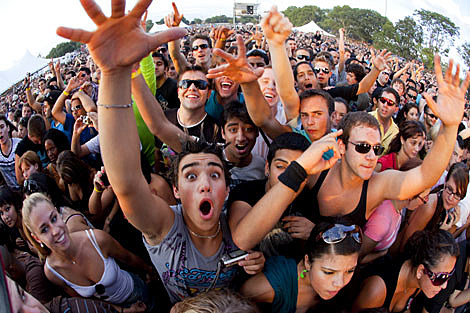 While from the outside, Electric Zoo (Sept 5-6, 2009) might seem like a 2-day hell, overrun by fake-tanned, heavily hair-gelled masses and their female counterparts, the actual experience (at least for me) was far from it. While my jaw dropped in horror as many of the element described above boarded the ferry to Randall's Island at the 35th Street pier, and I was only further freaked out when the entire boat broke out in a sing-along to "Now That the Love Is Gone" by David Guetta (one of many deejays playing the festival), once I arrived the dread of dealing that all day, subsided.

For starters, the festival grounds were very accommodating size-wise for the number in attendance. When I first arrived around 12:30 on Saturday, there was ample room and even as the day wore on and the grounds filled up, I never felt that I was trudging through a crowd to get where I wanted to go. Along with the size of the venue, the diverse spread of deejays (who were grouped at four different tents/stages vaguely according to similar genre/sound), kept my interaction with club-goers whom I would rarely run into under normal circumstances, to a minimum. In the instances where I was confronted with people straight out of My New Haircut (NSFW!) I couldn't say a bad thing about them. Everyone at the festival seemed to be too happy to be there, and dancing their asses off, to care what was going on around them, or to do anything too outwardly annoying to ruin anyone's time. 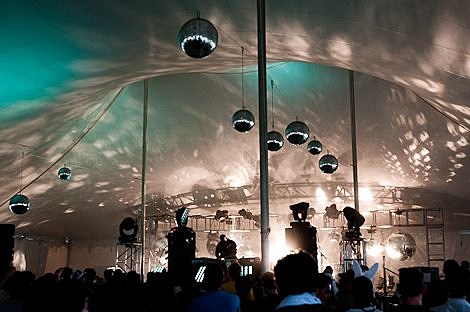 I started Saturday afternoon off by doing a quick run-around to all the tents and the main stage, getting a lay of the land before settling in the Respect Grove where I spent the majority of my day & night. JDH & Dave P started off the day with a set that began on the mellow side, before building to one that was a little clubbier than usual by the end of the hour and a half. From there, Holy Ghost took over with their excellent blend of classic disco and modern touches.

While the tent had started to fill up over the course of the sets, I was completely shocked when I returned from a quick water break, to find the tent absolutely packed for DJ Mehdi's set. For whatever reason, I really couldn't get into the first half-hour or so of his set, but about 40 minutes in, DJ Mehdi dropped Pilooski's "Send Him Back" which despite hearing it from him many times before, I can't help but love. His set was great from then on. From Mr. Oizo, to Duck Sauce, to Tiga...Mehdi's set list (which you can read in the form of a reverse chronological rant on my Twitter) read like a best-of of this summer & recent years' electro.

Following Mehdi, Ed Banger label head, Busy P took over with his signature "I am playing whatever the hell I feel like" style, opening his set with "Conquest" by the White Stripes. From there things were very bleepy & bloopy for a while (think Nil), eventually turning to some more common electro-fare (Soulwax, Tiga, Mr. Oizo, Daft Punk) which DJ Mehdi helped to round out, tag-teaming with Busy P for the last 20 minutes of his set.

Next up was Steve Aoki, whose hit or miss sets I have lost the patience for...so I took a break from the Respect Grove to explore. I had some food and decided to check out Deadmau5. While at times there was something I found appealing about his set, whatever it was, was short-lived and ultimately would be replaced by something a little too clubby and repetitive. 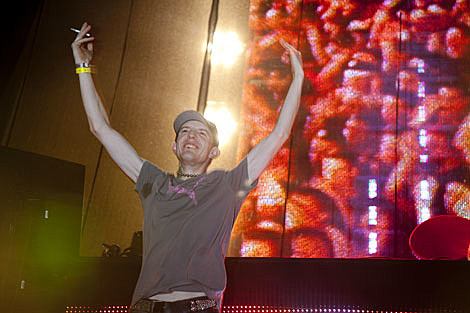 Before long it was time for Yuksek's live set, which in my excitement for seeing favorites DJ Mehdi and Busy P, I had totally forgotten about. I made it back to the Respect Grove about 10 minutes into his set which can only be described as an hour of loud, synthy bliss, perfectly paired with live vocals from Yuksek. There were maybe one or two songs that were a little louder/bordering on noisy that I wasn't too fond of, but overall, up to that point, his set was my favorite of Electric Zoo. While I had been looking forward to Tiga's set which followed, about halfway through I physically could not dance anymore. I sat on a hill nearby (at which point he dropped a great mash-up of the Prodigy's "Thunder" and "Charly"), relaxing until the ferry arrived.

The next morning it was hard to believe I was about to do it all again. While Saturday's line-up featured quite a few of my favorite deejays, I was a little less enthusiastic about Sunday's. Aside from really looking forward to Château Flight, there were only a few other acts that I was a little curious to see. Thankfully a chill (though a little commercial at times) early afternoon set from Tom Middleton combined with beautiful weather and an iced coffee put me in a great mood for the rest of the day. 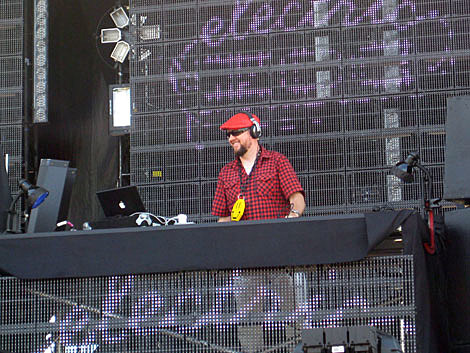 Château Flight followed with what wound up being my favorite set of the entire festival. Other than seeing I:Cube deejay at Sunday Best earlier this summer, I was only familiar with a handful of the Parisian duo's tracks and had never seen them perform. The pair (made up of Gilbert Cohen and Nicolas Chaix aka I:Cube) somehow masterfully created a very layered, melodic hour of music, out of what were oftentimes very minimalist sounds. The tempo combined with the fullness of the sound made the set very engaging and dance-able, despite its minimal elements, making for a surprisingly intense amount of dancing so early in the day. 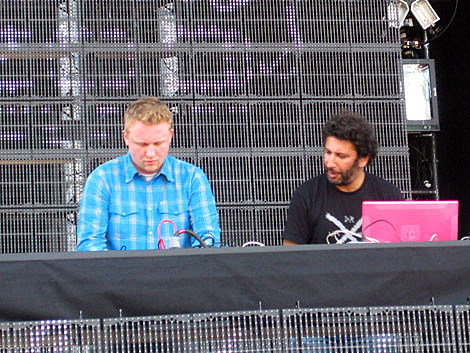 After Château Flight were through, I realized I had some time before I needed to head over to the Grove Discotheque where I was planning on seeing Frankie Knuckles and Andy Butler (of Hercules and Love Affair). Lindstrom and Prins Thomas were on next at the main stage (where I had been for the two previous sets) so I decided to just stay put. I originally had no intention of seeing them mainly because I wasn't able to get into Lindstrom's set at Studio B earlier this year, and had never really gotten into any of Prins Thomas' tracks. When a heavily bearded, bushy-haired guy got behind the decks, for a short while I thought the schedule had been switched, as there was no Lindstrom in sight, and I pictured Prins Thomas to be a similarly built, lanky, Norwegian. 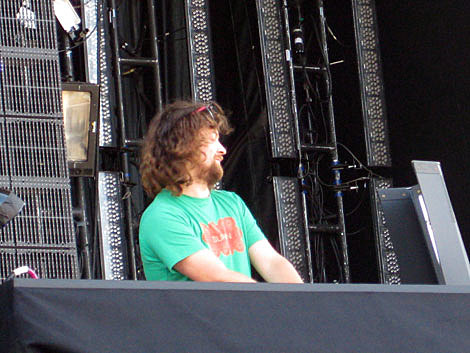 Within a few minutes the spacey disco was flying and Lindstrom began setting up nearby while Prins Thomas continued deejaying. Prins Thomas' set added some much-needed thump to the base of space disco which is what I'd been missing when I saw Lindstrom in January. It became apparent after a very involved set-up by Lindstrom and a tech on a separate table, that he and Prins Thomas were doing separate sets. Prins Thomas' set was such a great blend of deeper space disco, classic disco, and some oddballs (like "Pop Music" by M) that I decided to stay for the entire set, even though it meant missing the first half hour of Frankie Knuckles'. 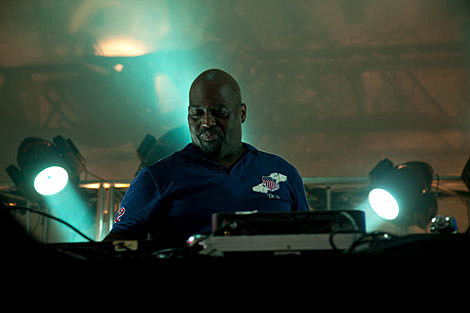 When I arrived at the Grove Discotheque in the middle of Frankie Knuckles' set, the tent was already packed with people really getting down to some fine disco and house. I joined in pretty much instantly, when without warning, Frankie dropped what has been a guilty pleasure jam of mine for nearly a month...Whitney Houston's new single "Million Dollar Bill". While it stands fine on its own as a pop/r&b single with a throwback feel and modern edge, Frankie's version had that added bounce which made everyone lose it on the dancefloor. His set continued down a similarly upbeat, discoey, housey path before he handed the headphones off to Andy Butler for the second half of the set. 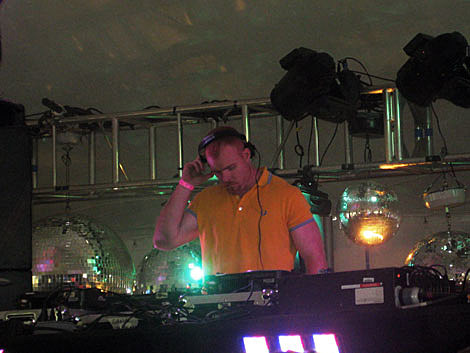 Unfortunately by the time Andy went on, between Frankie and Prins Thomas' sets I was disco-ed out. I took this as another opportunity to explore the festival. After many failed attempts to get into Matthew Dear's music I skipped the Sunday School Hilltop, where he was doing a set under his Audion moniker, and walked around, taking time to catch Josh Gabriel playing to an absolutely packed & moving Riverside Arena (which had been that way literally *every* time I passed by the tent the entire weekend). While it wasn't something I would seek out again, what I caught of Josh Gabriel's set was ok and his energy and the crowd's reaction to it actually made it a fun experience, despite not really enjoying the music. The same was true of Steve Angello's (though I actually enjoyed some of the music would be curious to witness one of his sets from start to finish) which had one of the biggest, happiest crowds (especially for a daytime set) I'd seen the entire weekend. 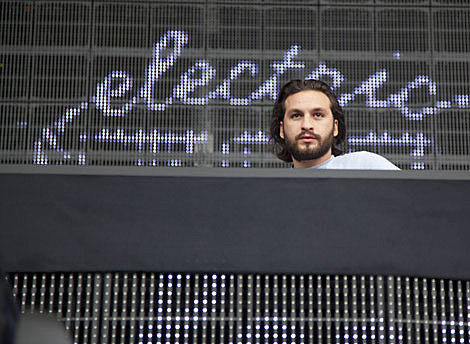 Overall, I can't stress enough the positive vibe Electric Zoo had . The crowd was full of groups of people who you would think would not get along - from muscleheads, to ravers, to hippies, to hipsters - yet I never saw anyone having any issues. Even I, who more than occasionally feels like going ballistic after getting bumped into repeatedly at shows, had absolutely zero negative experiences undoubtedly due to a few factors: Everyone seemed genuinely happy to be there and was too busy dancing & doing their own thing to be a nuisance. The entire festival was very well organized. There was plenty of space, making it easy to get where you were going as well as dance. Lines for most concession stands were short and fast-moving. There were NO LINES for the porta potties which I have never experienced anywhere ever! Sound-wise I never witnessed any problems that disrupted or stopped sets. There was the occasional adjusting of levels at the beginning of sets, but nothing that derailed the performers' schedule. Everyone went on when they were supposed to, nearly down to the minute which was also something I have rarely experienced, especially at an event this big. The good vibes that people brought to the festival to begin with, were undoubtedly maintained and reinforced by everything being so well planned and well run. Overall it was a great weekend both in terms of music and just plain fun times. While there were some acts there that I would never have any urge to see, the spread of the line-up made that not matter. I thought it was a great event in general, and a wonderful starting point in terms of a major New York electronic music festival that I can only see getting better with age.

Shortly after running around to the different tents & stages late Sunday afternoon, it was time for me to catch a ferry back home so I could make it to the last Sunday Best on time (more on that HERE).

More pictures from the fest HERE and HERE.