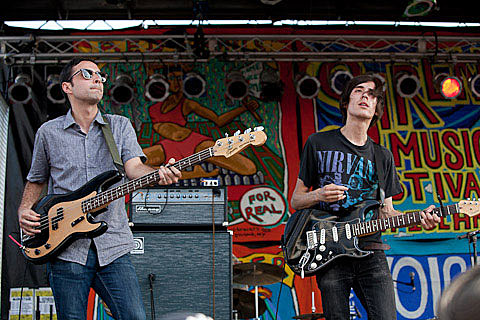 The Pains of Being Pure at Heart were destined to eventually play a BrooklynVegan show. I had them on the lineup of a SXSW day party in 2009, but they showed up late and never got to play their set. I tried to have them on a lineup of a SXSW day party in 2010, but they had to drop off before I even announced it (which is way better than cancelling after I announce it). Take three... I'm very happy to announce most of the lineup of the fourth annual official BrooklynVegan CMJ showcase (the first was at Bowery Ballroom, then Music Hall, then Music Hall again). It takes place at Music Hall of Williamsburg on Thursday, October 21st, 2010 (7pm doors).

The Pains of Being Pure at Heart will headline the show (or "play last" as I like to call it on these showcases). Also on the bill: The Blow, Yuck, a special guest I can't announce yet, and as previously mentioned, Young Man! I'm really excited for this one and partially because of the special guest who I've also been trying to get to do a BV show for a while (that's about the only clue I can give until I can announce it - not that it's a good clue). Set times TBA.

UPDATE 2: Yuck cancelled and were replaced by Suuns.

Tickets go on AmMEhx presale on Wednesday, 8/18, at noon. General sale starts the following Friday at noon. You can also get in with your CMJ badge (first come, first served).

For the Pains of Being Pure at Heart and Yuck it will be one of three shows the two bands will play together (the others are Philly and Boston). All dates below...