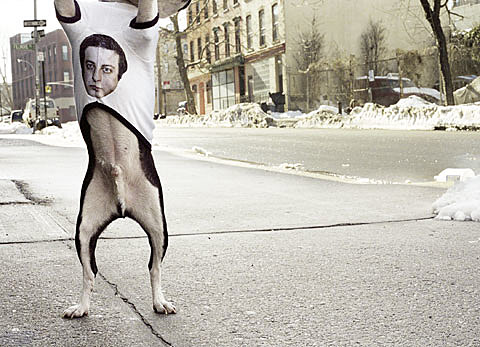 As I get older, I just I don't have the wherewithal to see as much comedy as I should. It's really depressing. There are so many goddamned GREAT comedy shows happening in Manhattan, Brooklyn, and even Queens that rather than pick one to go to, my brain shuts down and says "Just go home and watch Wheeler Dealers on the ole DVR, KK." It was easier to decide when Rififi was around. So thank Cod there's a yearly comedy festival in Brooklyntown that brings my ever flabbening body out of hibernation and reacquaints me with a sliver of the current roster of the greatest living comedians. That festival is the Eugene Mirman Comedy Festival, and this year it takes place from September 16th - September 19th and will impregnate The Bell House, The Rock Shop, and Union Hall (or as I like to call them, the most annoying venues to go if you don't have kids or play bocce) with its comedy seedlings.

As with previous years, the 2010 Eugene Mirman Comedy Festival brings together a supremely jaw-dropping group of comedians and performers. What can one expect? Oh, I don't know. Maybe (definitely) Emo Philips, Daniel Kitson, Jon Glaser, Max Silvestri, David Cross, Jon Benjamin, Kristen Schaal, Kurt Braunohler, Yo La Tengo, John Wesley Harding, Sarah Vowell, John Mulaney, and so many more I'm liable to puke with glee should I continue. What am I most looking forward to? Thanks for asking! I'd have to say it's a toss up between the bill Yo La Tengo falls on and a rare Tinkle performance (without Todd Barry, sadly)(although, Todd is opening for Superchunk at MHOW on September 19th, so that's something) (sold out though) (probably because Todd is on the bill).

The festival line-up will be tweaked, added onto, emboldened, modified, and made better as we make our way to the opening date, but have a gander at what's already planned below. In the immortal words of the person who put the roster together for me, "This is what's happening; but not everything that's happening". Ticket info to follow, but many shows will be on sale in advance. Also, please see a message from enfant terrible David Cross below...

Why Do I Know Everything About Everyone At This French Diner?: An Evening of Espionage Themed Comedy Celebrating Our Love of the Bourne Trilogy and All Things Spy (SATURDAY 9/18, Bell House, 9PM) w/ Slovin and Allen, William Graham (Executive Producer of the Onion News Network), Kumail Nanjiani, Sarah Vowell, Eugene Mirman.

--
A Message From David Cross

Hey Each and Every One of You,
So, I'm back in NY (after almost immediately having to go to LA for the Television Critics Cluster Fuck) and working on Will Arnett (and Mitch Hurwitz's) new show, Running Wilde. It's gonna be both hellafunny and heckafunny. As per usual with a Mitch Hurwitz show, my character is never comfortable. This week I am wearing heavy, full clothes that have been degraded and "filthied" up as I have just spent three weeks stowed away on a garbage barge (my character that is, I flew back from London in an Aeroplane). Wearing all that in full NY summer heat/humidity? Well, let's just say I have a passion for amusing you and yours. I'll do whatever it takes goddammit!!!

Todd Margaret is looking great. Just got the final, final offline, graded, versions sent and we're good to go! It starts airing on October 1st. Fridays at 10:00 on IFC. Also, and perhaps more importantly, my banjo playing is coming along nicely. I had my second lesson this evening and my teacher has been very good about humoring me to a state where I actually believe his bullshit about how, " I know it seems impossible right now but eventually it will all come together and you should be nominated for a Grammy by the end of the year". OH! Also, if you're in NY during September 19th, Jon Benjamin and I are doing a special one-off "Tinkle" for the closing of this years Eugene Mirman Brooklyn Comedy Festival (at The Bell House I think? Not sure). So come to that if you can. Those shows are always fun and a tiny bit educational. Okay, just wanted to check in and make sure you knew that I wasn't dead.
I'll see some of you later,
David
And yes Elise, I remember you.