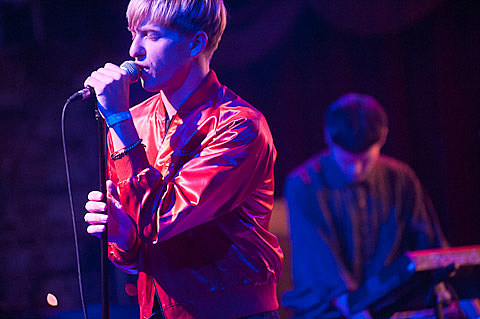 The New Music Seminar is back in action for 2013, happening from June 9 - 11 in New York City. A regular summertime fixture here from 1980 - 1995, the NMS returned in 2011 and expanded last year. While featuring industry panels, there are also showcases too on June 10 & 11 with a kickoff show at Webster Hall on June 10 featuring The Drums, Pearl & the Beard, Avan Lava, and Hess is More. Tickets for that show are on sale now and NMS attendees can get in with their badges (which, starting at $249, are priced for industry, not music fans).

Most of the showcases, however, happen at small Lower East Side venues like Pianos, Cake Shop and Tammany Hall. One that's notable is an all-Swedish showcase at Cake Shop on June 10 featuring Chris Merritt, Yves Jean, State of Grace, and Full of Keys. Visit the NMS website for full showcase and conference schedule.

Speaking of Swedish and Cake Shop, tonight (6/3) at the Ludlow venue are three Scandinavian bands who were here to play NYC Popfest over the weekend. The show is headlined by Finnish band French Films who were (along with UK group Flowers) the breakout band of the weekend, bringing some rock n' roll swagger to the fest that is often just associated all things twee and cute. (They're playing a few times this week, actually.) Also playing: Sweden's Alpaca Sports (jazzy orch-pop), and Azure Blue (ethereal synthpop).

If NMS doesn't float your boat, next week has two other festivals: Chickfactor 21 at Bell House from June 11 - 13, which overlaps a little with The Northside Festival in Williamsburg (6/13 - 6/15).