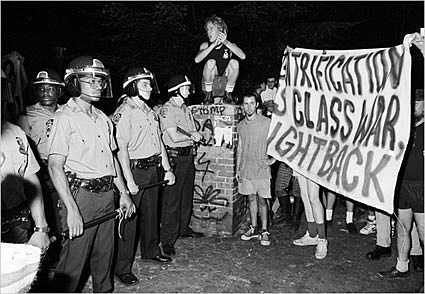 On the night of Aug. 6, more than 100 people showed up at the park to protest the curfew, drinking beer, lighting firecrackers and carrying banners with slogans like "Gentrification is Class War." Dozens of officers watched on foot and horseback, and around 12:30 a.m., some in the crowd began throwing bottles at the police.

From then until sunrise, officers battled with the crowd in and around the park, with the protesters hurling bottles and other debris, and the police using nightsticks and riot gear. Forty-four people were injured, 13 of them police officers. [NY Times]