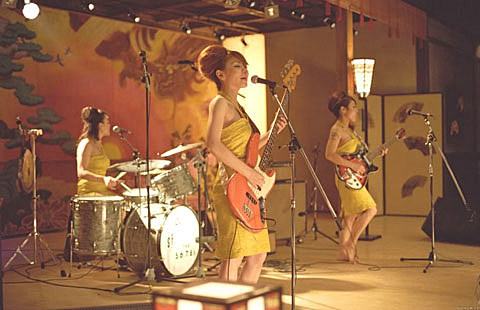 You might know the all female Japanese trio The 5.6.7.8.'s as the band who performed in a Tokyo Club in Quentin Tarantino's Kill Bill Vol. 1. They've also been recording garage rock records since the early '90s, which are sung almost entirely in Japanese but feature several covers of American rock songs notably including the 1950s song "Woo Hoo."

The band came to NYC this week for the Norton Records anniversary shows at The Bell House, where they played the first of four shows on Thursday night (11/10). Pictures from that show are on the way. They'll be sticking around NYC to play their own show at Mercury Lounge on Saturday (11/12) with Theee Bat and The Baxx Sisi's. Tickets are on sale.

The 5.6.7.8.'s recorded a live session for Jack White's Third Man Records on October 22, 2010. The session was released on Third Man earlier this year as a 12" vinyl and features Jack White's guitar playing on the song "I Walk Like Jayne Mansfield." The 12" is available to purchase and listen to samples at the Third Man webstore.