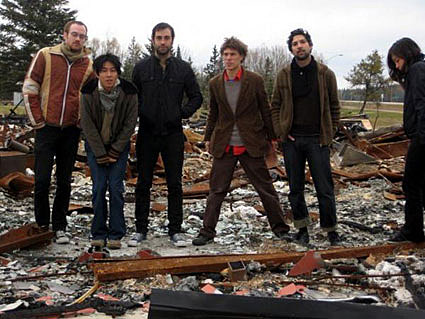 After the initial dabbling with a laptop in his bedroom, singer Rolf Klausener decided to try a more traditional approach. While incorporating all sorts of zany instruments into music is the soup du jour, The Acorn uses the staples to arrive at their otherworldly sound. The Ottawa-based band's latest album is a series of narratives relating to the life of Klausener's Honduran mother, Gloria Esperanza Montoya. During the two years it took to create the album, Klausener studied traditional Honduran percussion and rhythms, nowhere more apparent than on 'The Flood, Pt. 1', which falls in with some of the best musical hybrids of the past year (Vampire Weekend, Yeasayer). Elsewhere on the album, the Honduran influence meanders its way back in the mix, becoming another mystifying layer in this highly original psychedelic and artsy folk-rock. The band's tour dates are slim, but they can't keep the fans waiting forever, and this album is certain to find fans across the globe. [KEXP]

Check them out in NYC tonight (Feb 27) and Friday w/ Bowerbirds & Phosphorescent, or at one of their other upcoming shows.....