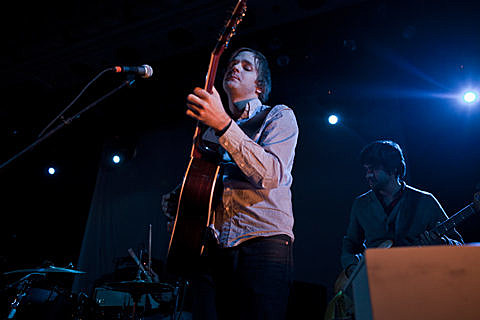 Sweden's The Amazing just wrapped up their tour with Tame Impala and have already made plans to head back to North America. The band will be playing the Tomorrow Never Knows festival in Chicago in January and will stop in NYC on the way there for a show at Mercury Lounge on January 25. Tickets for that show go on sale Friday, December 7 at noon with an AmEx presale starting Wednesday (12/5) at noon.. No other North American dates have been announced yet, but seems like a long way to travel just for two shows.

Meanwhile, Tame Impala, whose new album Lonerism topped NME's Albums of 2012 list, will be back in NYC on February 19 for a show at Terminal 5 and tickets for that show go on sale today (11/30) at noon.

And in related news, Norwegian band Young Dreams, who have toured Europe with Tame Impala, have done a pretty incredible cover of Tame Impala's "Feels Like We Only Go Backwards" which they have subtly renamed "Feels Like We Only Go Bachwards" which nods to both Johan Sebastian Bach and maybe Burt Bacharach, but sounds more like Brian Wilson is the big influence. You can stream it below and it will be released as a b-side to Tame Impala's original as a single next month.