10am tix 4 chairitea glasslands. real show. no dj set or stupid shit like that.- The Antlers

The Antlers at Bonnaroo (more by Dana (distortion) Yavin) 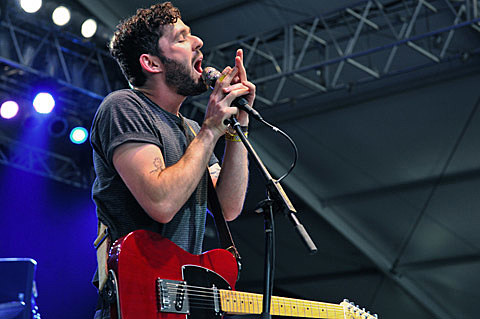 While we love the boys in The Antlers, they might want to step up their spell check game. (Or maybe "charitea" in that tweet above is a pun or something?) No matter, we're still excited about that previously teased, and now announced, secret Brooklyn show scheduled for the end of July.... which we now know will happen at Glasslands TONIGHT (7/30)! The band will play the rare, intimate show with Port St. Willow to benefit Charity: Water, a non-profit dedicated to "bringing clean, safe drinking water to people in developing countries." Tickets go on sale at 10AM.

The show is the only appearance scheduled for The Antlers in NYC until September, when they'll bless ATP's I'll Be Your Mirror on Sept 22nd. The band released their new Undersea EP last week. Stream it at Facebook.