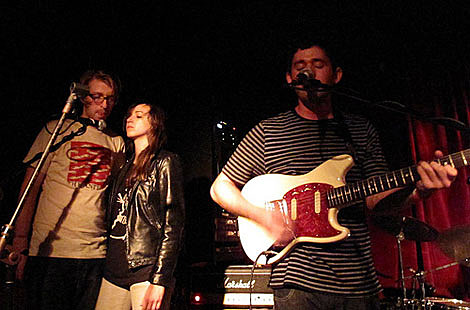 "On their return home after another extensive and triumphant tour, last night The Antlers continued their evolution at Maxwell's [on October 3, 2009]. As a headline band, they packed the legendary Hoboken club and performed a sixty-five minute set of Hospice material -- with several reworked numbers. Opening with a quiet rendition of "Bear", the band immediately turned up the energy as the song growled to a intense conclusion. "Thirteen" followed, with Sharon Van Etten's vocals from the album filled in admirably by set opener Holly Miranda. Holly and her guitarist Tim returned and contributed to the set's highlight -- a thoroughly entrancing version of "Wake"." [NYC Taper taped the show]

The Antlers have announced their first big NYC headlining show. It's at Bowery Ballroom on December 15th. Tickets go on sale Friday at noon (openers TBA).

The Bowery show is a little less than two months after The Antlers play the BrooklynVegan CMJ showcase at Music Hall of Williamsburg with The Walter Schreifels Band, Nathaniel Rateliff & The Wheel, Laura Marling, and Fanfarlo (and one more TBA). It's eight days from the time I type this. Tickets are still on sale.

The October 20th Music Hall show is one of many BV shows during CMJ this year. Another one is happening all day at Pianos on Thursday, October 22nd. That full lineup is TBA shortly, but I can tell you that it does include Holly Miranda (who recently signed to XL).

Sharon Van Etten, also referenced in the review above, is on the bill of the free BrooklynVegan (in partnership with Bowery Presents... details TBA) show happening at Pianos on the afternoon of Saturday, October 24th.

All Antlers dates, including one more CMJ show, below...