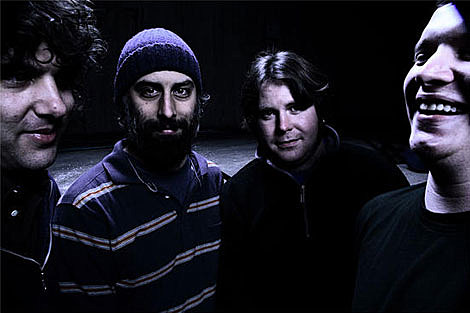 By now seasoned veterans of the independent music world, The Appleseed Cast is proud to announce the release of Sagarmatha, their sixth studio album and second release with The Militia Group. The album will be available on February 17, 2009. The Appleseed Cast recorded at Mixtape Soundlab and Toy Shop, with their own Christopher Crisci engineering, and later re-grouped with Ed Rose at Black Lodge Recording in Lawrence, KS for instrumental overdubs and mixing. The record leads The Appleseed Cast to the peak of their musical ability, into experimental post-rock, and often purely instrumental territory.

Now on a February 28th-ending tour in support of that new record, The Appleseed Cast will hit the North American road again in April. During that leg they play Mercury Lounge on April 18th. Tickets for that NYC show are on sale at noon. All other known dates, and the new album tracklist, below...

"Sagarmatha" is Nepalese for Mount Everest.

Sagarmatha track listing:
1) So The Little Things Go
2) A Bright Light
3) The Road West
4) The Summer Before
5) One Reminder, An Empty Room
6) Raise The Sails
7) Like a Locust (Shake Hands With The Dead)
8) South Facing Col
9) An Army of Fireflies