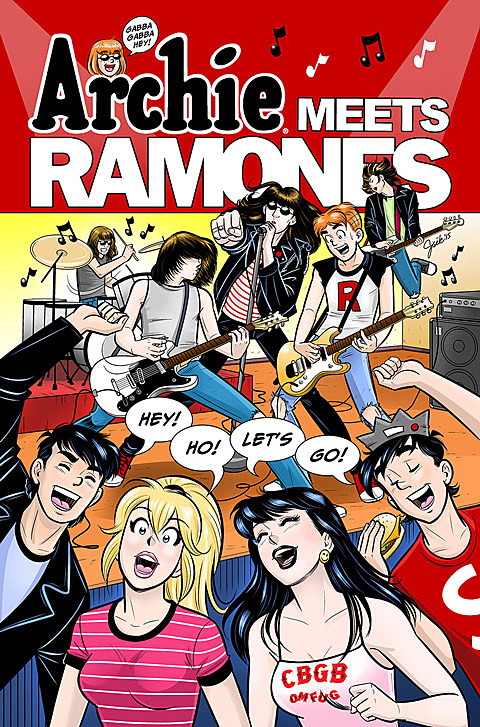 Though much of the hype these days has been devoted to movies/TV shows/videogames, the San Diego Comic-Con, which just wrapped up its 2015 edition, does still deal in comic books. And not just superhero ones, either. Archie, the comic about the redheaded Riverdale teen who has been stuck in a near-75-year love triangle with Betty and Veronica, was part of a panel called "Comics & Pop Music: Making New Noise," and revealed that the kids, who have their own band The Archies, would meet The Ramones in an issue to be published in 2016. Said Archie Comics' Alex Segura (via Comics Alliance):

"Matt got in touch with the Ramones' people, and they were super into it. So I reached out to Gisele [Lagace, illustrator], whom I'd worked with before on the "Occupy Riverdale" story and other things. We're all huge Ramones fans, and though it took a while to work out the details, once things started moving, it actually went pretty quick. It's gonna be a super-fun oversized one-shot, with covers by some truly amazing artists (whom I can't announce just yet), and it syncs up nicely because it'll be the 75th Anniversary of Archie, and the 40th Anniversary of the Ramones... It's really kinda like a dream come true to be doing this."

It all kinda makes sense, as The Archies and other late-'60s/early-'70s bubblegum groups were an influence on The Ramones, though it will certainly be one of the wilder things to hit Riverdale...ever?