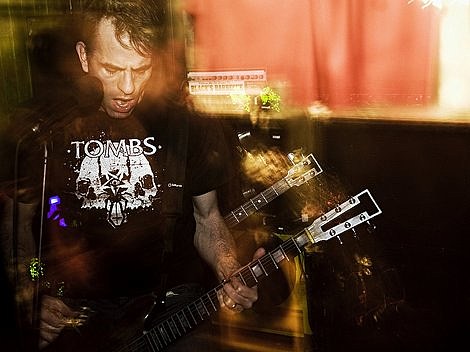 The Austerity Program have proclaimed that Backsliders And Apostates Will Burn. During the four tracks of fist-shaking and ear-splitting noise rock, their new EP builds upon the aggro sounds of Am-Rep angular punk while retaining an identity of its own. The Backsliders And Apostates Will Burn EP is due on May 4th via Hydra Head, and will be available in the expected forms (CD, digitally, vinyl with accompanying CD) in addition to a "data-DVD-R that will include 24 bit .wav versions of all tracks on the CD so that you can remix it yourself". Hmm, do I smell a Gucci Mane - The Austerity Program remix album? Grab the unremixed "Song 26" above.

The band has a pair of shows with Disappearer and Phantom Glue on their calendar at the moment, including an album release party on May 2nd at Union Pool in Brooklyn. Flyer for that show, a video, and both tour dates are below... The Austerity Program "Backsliders and Apostates Will Burn" Promo