The Avengers back in the day (photo by Marcus Leatherdale [via]) 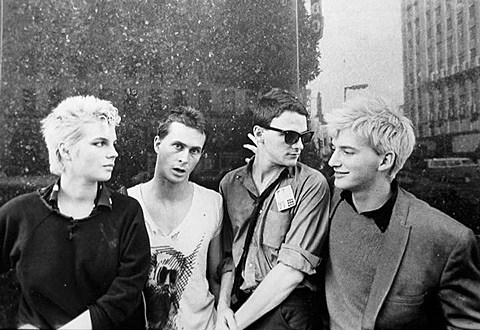 What allegedly began as an excuse for punk fashions became, briefly, the most powerful band in the San Francisco area; the Avengers' original EP was a minor classic of its time, indicating that they might have become America's best straight-ahead punk (not hardcore) band had they lasted. The four-song Avengers 12-inch boasts tight, memorable cuts instrumentally akin to Johnny Thunders and the Sex Pistols, though it's Penelope Houston's intoning words of some depth that makes the difference. Like X without any pretensions; too bad Steve Jones couldn't finish the production (the mix needed him). - [Trouser Press]

San Francisco punk greats The Avengers -- which still feature founding members Penelope Houston and Greg Ingraham -- are heading to the UK for a short tour in August. On the way, they'll stop in NYC to play The Bell House on August 4. Tickets for the NYC show go on sale Friday (2/20) at noon.

All dates, plus a few streams of their early singles, below...