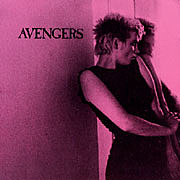 "The Avengers were a San Francisco based punk band in the first wave of American punk......The Avengers opened for the Sex Pistols in San Francisco for their final show at Winterland, and their 4-song EP was produced by Steve Jones of the Sex Pistols.......The CD "The American in Me" released in 2004, has 4 studio tracks, and 8 live tracks recorded at the Old Waldorf in 1979 . With the release of the new CD, vocalist Penelope Houston has joined with original guitarist Greg Ingraham to bring the Avengers back to life, completing the line-up with bassist Joel Reader and drummer Luis Illades. The new group is sometimes called the "scAvengers", and is playing a few select shows on the West Coast and the UK....." [Wikipedia]

Penelope is calling the group the Avengers again, and they're leaving the West Coast and UK to play CBGB (during it's last month) on September 8th. Listen at MySpace. All dates below...