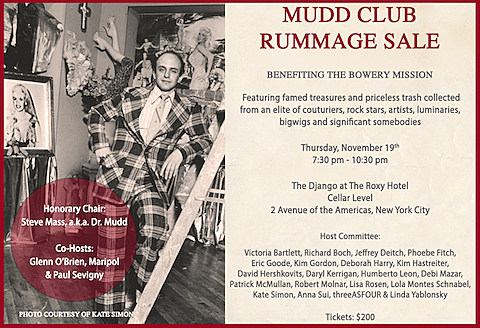 Steve Mass, who ran the iconic late-'70s/early-'80s downtown NYC hangout/venue The Mudd Club, is throwing the first-ever official Mudd Club event since its closing. Dubbed "The Mudd Club Rummage Sale," which happens Thursday (11/19) at The Django at The Roxy Hotel. The event is a benefit for The Bowery Mission and features "famed treasures and priceless trash collected from an elite of couturiers, rock stars, artists, luminaries, bigwigs and significant sombebodies." Those somebodies donating items include Sting, Nan Goldin, The B-52's, and Cindy Sherman, and more. Mass told The NY Post, "It's not going to be a Sotheby's-type deal but more like a church basement sale."

In addition to the rummage sale, there will be an open bar, hors d'oeuvres, and some live music from Kate Pierson and Pat Irwin of the B-52's plus Lenny Kaye of Patti Smith Group. DJs for the evening will be Paul Sevigny and Glenn O'Brien. The event's Hosting Committee includes Anna Sui, Kim Gordon, Jeffrey Deitch, Deborah Harry and more. Tickets for this benefit are $100 till Wednesday (11/18) at 3 PM and $200 after.

Check out video of The Cramps playing The Mudd Club in 1981, below...