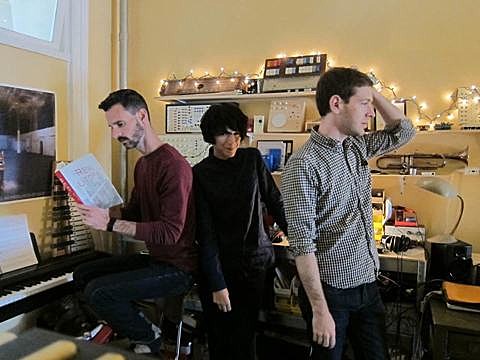 NYC synthpop band The Ballet have been hibernating the last few years, rarely playing live and no recorded material since 2009's terrific Bear Life. The band are finally getting around to doing something again, having signed with Fortuna Pop who will release The Ballet's new album, I Blame Society, on June 10. You can check out the video for "Is Anyone Out There?" below. It's a little less overtly Magnetic Fields-y than we've maybe heard before, but it's definitely whetting my appetite for the album.

The Ballet were always good live -- they played an BV show in 2006 -- and you can see their first NYC gig in ages on Saturday (6/1) afternoon at Spike Hill, which is part of NYC Popfest and is free. It also features Vermont's charming The Smittens, Norwegian band Making Marks and Austin's Silkies.

Set times for the Spike Hill show, plus The Ballet video and streams from the other bands playing below...

Is Anybody Out There? from Greg Goldberg on Vimeo.