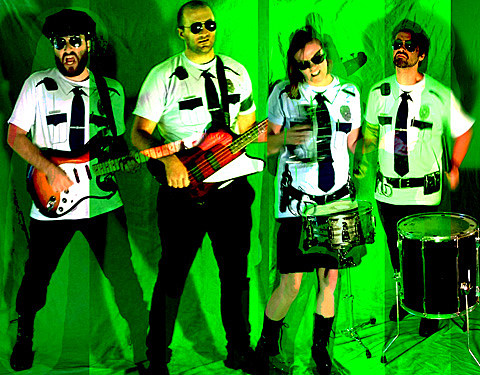 Florida psych outfit The Band in Heaven have a new single, "The Boys of Summer of Sam," out on November 18 via HoZac. Inspired by police-related shootings of the past year, it's about how "it felt like the serial killers to be afraid of were actually the police." The tracks were given a finishing touch by Pete Kember, aka onetime Spacemen 3 member Sonic Boom:

This is the second time we've worked with Pete on a release, the first was the Psych For Sore Eyes release on Sonic Cathedral where he mastered all the bands on the compilation. That's how we met. It was always kind of nerve wracking talking to him because we are such huge fans of Spacemen 3 and always had this feeling that if we said the wrong thing there could be grave results, always heard wild stories about those guys. We angered him just one time, and it was an intense fury we faced. But he's awesome, and walked us through so many steps of recording techniques he's learned over the years. One issue for us, however, is he kind of types phonetically, maybe in a dialect native to where he's from in England... we'd have to decipher the help he'd be giving us for a while before we could use it.

Sounds like it came out all right, and there's definitely a big of Sonic Boom's drone-n-gaze here. You can listen for yourself as the A-side makes its premiere in this post.

Pre-order your copy of "The Boys of Summer of Sam" at HoZac. Stream it below...